TedxOxford (posted by Jimmy in England)

“We believe passionately in the power of ideas to change attitudes, lives and ultimately, the world. So we’re building here a clearinghouse that offers free knowledge and inspiration from the world’s most inspired thinkers, and also a community of curious souls to engage with ideas and each other.” The preceding excerpt is the mission statement of TED. What is TED?  Well, since it is a name in the English language, there are probably many Teds.  The TED that I am talking about is neither a person nor an inappropriate comedy with Mark Wahlberg and his fuzzy grown up stuffed animal.  TED is an acronym for Technology Entertainment and Design and it is a non-profit organization that was founded in 1984.  Originally TED was an annual conference in Silicon Valley that brought together brilliant minds to discuss various research ideas.  Since then, TED has absolutely exploded.  There are now two major conferences each year, one in Long Beach California and the other in Edinburgh. They cost $ 6,000 to attend and thousands of people listen to 50 speakers over 4 days.  Past TED speakers include Bill Clinton, Bill Gates, Richard Dawkins, Google Founders Larry Page and Sergey Brin, and many Nobel Prize winners. 1 million dollars is given to one speaker to help fund his/her idea. In 2012, TED became so valuable that videos started being streamed on Netflix. TED also holds what are known as TEDx conferences which allow the same speakers to reach a broader crowd in various different cities.  And that is why I mention it.

On Saturday night, after a long week of tutorials and presentations, I was doing what every normal 20-year-old college student does; I sat anxiously next to my computer by myself in my room and listened to the greatest event occurring that night.  The Richmond Spiders Men’s Basketball team had an exhibition game against Randolph Macon so I tuned in from across the Atlantic and couldn’t have been happier.  Earlier in the day, I was talking to a student about theatres in Oxford and she told me to visit the Oxford Playhouse website.  During the game I checked it out and saw that in less than 10 hours, they would be hosting TEDxOxford.  Due to my impulsive nature, I immediately bought one of the remaining tickets and went to bed.  I had seen many TED talks online and had always wanted to attend an event.  The concept of seeing ‘ideas worth spreading’ was thrilling to me and I couldn’t have been more excited.

The next morning I went to the Oxford playhouse and prepared for the 6 hour event that would host 11 speakers, 3 videos and a few hundred people. I have been able to do so many wonderful things during my time at Oxford, but TED was by far the best event that I have attended. 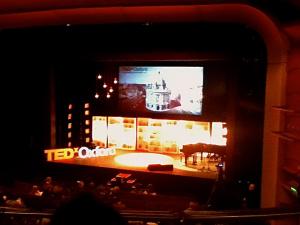 Stage of TedxOxford- Ideas Worth Spreading

The diverse ideas carried so much momentum and truth that it was truly inspiring.  Here are a few of the highlights:

Frank Warren is the founder of postsecret.com, which up until Sunday, I had never heard of.  If you get a chance, watch his Ted Talk online.  He started by having people mail him secrets and he puts them on his website.  It has gone viral and has over 568 million visitors. The secrets vary from hilarious to deeply serious, but all share a common thread- they deserve to be heard.

Arthur Benjamin is a visiting professor from Harvey Mudd college and he calls himself the ‘Math Magician’.  He rattles off complex multiplications in his head like it is simple arithmetic. He invited three students on stage to perform calculations on the calculators from their iPhones and he raced the calculator.  He squared 576, 9604, and 676 faster than the students could type the digits into the calculator.   Needless to say, he’s a genius.

Michael Tobin, the CEO of Telecity group was named the UK’s Service Entrepreneur of the Year by Ernst and Young in 2010.  He spoke about specific adventures of his various management teams.  A few years ago, he wanted to show his team that fear is a mindset and that if they wanted to succeed they had to sit with their fears and overcome them.  “When you are scared, move through it,” he said. So he took his team to a shark tank in the UK and made them sit in the tank next to these huge sharks for a few minutes.  Prior to being forced in, many of the team members were ready to quit instead of jumping into a shark tank.  He said that after the experience they had the most successful year of business in his career.  Mr. Tobin explained another time he had to merge two rival companies together and associates from both companies would have to work with each other.  Many of the people were reluctant to work together so Mr. Tobin took them to an ice hotel in Sweden where temperatures are below freezing. It is mandatory to sleep two people in a bed to generate extra body heat, so he took all of the people who did not want to work together and made them sleep in the same bed together.  He said that by the end of the trip, the rival companies were in the past and the merger was a success.  His last story was in regards to a specific year when most of his associates were complaining that they wouldn’t fill their quotas.  He took his team to the Auschwitz concentration camps and told them to stop moaning because their lives were easy in comparison.

The best talk of the day was by James Rhodes.  Unfortunately, his TED talk probably won’t be put on the website because he cursed a little bit too much and referenced a few inappropriate things.  Anyways, he is an English classical pianist and he is the man.  If you have the chance, check him out on YouTube because his work is unbelievable. He argued that people get stuck in their beliefs and can never see the world with a diverse point of view.  He urged us that, “whenever you are absolutely convinced of something, do the reverse of it for one week and see what happens.”  He said that we live in a world that is filled with unconscious distraction and that it has become acceptable to wander off when we are interacting with people.  His main point, and the main point of the conference was, “People need to stop apologizing for who they are and classical music needs to stop apologizing for what it is.  Go do what you love and be who you want to be.”

“The chance for greatness, for progress and for change dies the moment we try to be like someone else.”-Faith Jegede

This entry was posted on Tuesday, November 6th, 2012 at 3:22 pm and is filed under Fall 2012, Jimmy in England. You can follow any responses to this entry through the RSS 2.0 feed. You can leave a response, or trackback from your own site.