The First 5 Days (posted by Jimmy in England)

In the words of Marv Levy, the Hall of Fame Buffalo Bills head coach, “Where else would you rather be than right here, right now?” I arrived in Oxford last Thursday and have been in awe ever since. I spent the first two nights living in a hostel (Central Backpackers) ten minutes from the center of the city. If you have never stayed in a hostel before, I highly suggest it. Being an American college student, I feel like I was ignorant to the way in which many people live. In the hostel, I met people from many different walks of life. I was only there for 48 hours, but I met people from Spain (southern and Basque regions), Norway, Germany, Greece, Columbia, China, Sweden, Mexico, India and Australia. Even though there were many different world views, we all shared one common interest. Whether we were studying at a university or traveling city to city to find jobs, we were all working towards what we thought would bring us happiness. After my two day stay in the hostel, I was able to move into my dorm in the city of Oxford. For those of you that do not know, Oxford is a mid-sized city with a population of more than 150,000. There are many shops, restaurants, and cafes that I plan on visiting during my stay. My room is located in Jesus College in the center of the city. 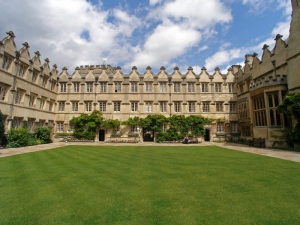 Everybody in Oxford has been incredibly friendly. When I arrived a few days early, I was invited to attend two afternoon cream teas for postgraduate students. (Oxford runs on a trimester schedule. Trimesters run from 0th week-9th week. Last week was -1st week and this week is 0th week. Postgrads arrive in -1st week while undergraduates and exchange students arrive in 0th week. Classes start in 1st week. It’s a little confusing.) These cream teas were part of the postgrad orientation and were a chance for students to meet and listen to prominent speakers. The main speaker was Dr. Andrew Briggs, a professor of nanomaterials at Oxford. His research team is trying to build what is known as a ‘quantum nanocomputer’. I have spent the last few days trying to figure out what it is, but his talk had nothing to do with complex physics. He introduced an idea, one that I have seen is a common theme among the faculty at Oxford. He said, “When you mix the personal desire to learn with an environment like Oxford, magic happens. But the reason that we succeed is due to a combination of work and personal reflection. We spend one day in deep thought over life’s biggest questions. We leave our research labs and ask ‘who am I’ and ‘why does any of this matter’. An Oxford education is not simply about academics, but rather about finding out who you really are.” These cream teas were very helpful in understanding how people succeed at this university.

Being at Oxford has not been entirely about academics. One night I went with another American exchange student to the Turf Tavern. It is a famous pub where Bill Clinton frequently hung out while studying at Oxford. The next night I visited another famous pub called The Bear Inn, which was built in the late 17th century. They are famous for their collection of ties that they collect. Years ago, if you ran out of money at the pub you could cut off the end of your tie in exchange for a drink. The tradition became famous and the collection is still growing.

Tie collection at The Bear Inn

These last five days have helped me adjust to English life. I feel fully prepared to immerse myself in all that this city has to offer over the course of the next year. Today I start orientation. I will keep you all updated. Until next time, keep being great!

When the world knocks at your front door, clutch the knob tightly, open on up, and run forward and far into its widespread greeting arms with you hands outstretched before you. Fingertips trembling, though they may be.- Anis Mojgani

This entry was posted on Wednesday, October 3rd, 2012 at 10:03 am and is filed under Fall 2012, Jimmy in England. You can follow any responses to this entry through the RSS 2.0 feed. You can leave a response, or trackback from your own site.