First Week of Classes, Culture Night and the Reccereception (posted by Indira in Sweden)

It seems like the semester (which ironically in Swedish actually means vacation) has officially started.

The first week of classes is over and I have to admit that it was a long week. At first I was really surprised by how the teaching system here operates in a completely different way than back at UR. Here, everyone usually takes one class at the time – basically you take one class for 5 weeks and you have that class every day – which means that you focus on only one field/area at a time. I think this is rather good approach. Right now I am taking two classes simultaneously (which is also one of the options), one in the Department of Government and the other in the Department of Sustainable Development. The way these classes run is very different. My Government class is very informal, and classes (lectures and seminars) are not mandatory, while the final exam is mandatory (of course!). There are lectures where we have about 50 students (mainly Swedish freshmen and exchange students) and seminars where there are about 15 students. During the seminars we discuss the class material, while during the lectures we simply listen to what the professor/lecturer has to say on a topic. My Sustainable Development class, on the other hand, is mandatory, but it is organized in essentially the same way as my other class (lectures and seminars). We also get a new lecturer for each class, so it’s rather dynamic and you learn from the experts in specific fields. In the beginning I was truly confused by this system, but now I understand it better. 🙂

After my last class on Friday I had a Reccereception. As a member of the Värmlands Nation I signed up for the Reccereception and Reccegaque which are basically a semi-formal and a formal dinner that help the new members (recce) get acquainted with the Nation. 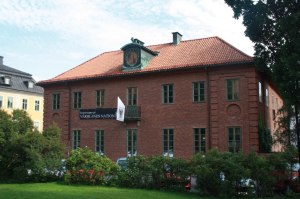 During the Reccereception we had a guided tour of the Nation houses and then we had a dinner. Dinner was more of a lesson for all of us newbies on how to act during the real formal Reccegasque. We learned about drinking snaps and singing songs (we even got special Songbooks so we can sing along with the Songmaster). I would say that the Reccereception was a real success and I had a lot of fun. 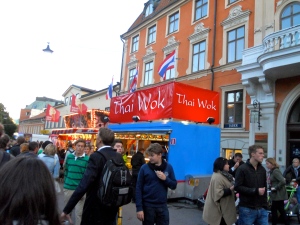 Crowded streets of Uppsala during the Culture Night

Last week there was also the Culture Night here in Uppsala. All museums had free entrance and were open during the night. There were also a lot of various cultural events across town. It is very interesting to see how so many different cultures come together in such a small city like Uppsala. The streets were very crowded and everyone attended at least one event. My favorite part was the fire display. There were fire dancers who showed us their most mystical moves and kept us warm during the cold night. If you are ever in Uppsala during the Culture Night – make sure you take part in it, it is definitely worth it! 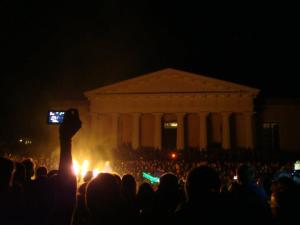 Fire Display at the Botaniska trädgården

Right now I am looking forward to the Reccegasque! I am sure it will be a blast 🙂

This entry was posted on Friday, September 14th, 2012 at 1:43 pm and is filed under Fall 2012, Indira in Sweden. You can follow any responses to this entry through the RSS 2.0 feed. You can leave a response, or trackback from your own site.