The past week was all about learning more about Sweden firsthand; through food, music, people and traveling.

Sweden is a beautiful country and when blessed with nice and sunny weather (which we were very lucky to have over the past week) it definitely reveals its vibrant and vivid side. This country is like the pieces of kaleidoscope glass – they shine and surprise you with a new image in no time.

This week I was lucky to experience so many new sides to Sweden through the cultural part of the IBS program. First of all we had a lecture (and a practical part) about the Swedish food where we learned more about the holidays in this country and how food makes them special. We also talked a lot about the differences in the diet in the north and the south of the country. Since, of course, words don’t really have a taste, especially when you use them to describe food you never had in your life, we had samples of the most typical Swedish dishes such as köttbullar (meatballs) with lingonberry jam, reindeer (yes, real Swedish reindeer), herring, salmon, and typical Swedish cookies one usually has with fika. At the end of the day I was able to say: Swedish food is amazing! 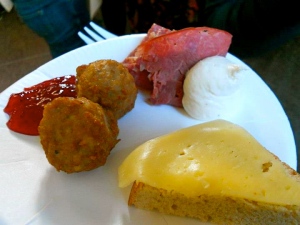 A few days after the Swedish food, we had a 3-hour long presentation on Swedish music by four musicians from the Uppsala region. They presented traditional, classical, as well as modern Swedish music.  The most interesting part was the performance on the nyckelharpa (traditional Swedish instrument that sounds so nice) and the ABBA impression (we had the performers dress up as the ABBA members and sing their songs). It was really fun being a part of this presentation since I learned so much about the way Swedish music evolved and developed.

Swedish music: both musicians are dressed in the traditional costume from the Uppsala region and the women is holding the nyckelharpa.

We ended the week by going to two Swedish cities on Saturday and Sunday. On Saturday we went to Stockholm (it’s really close, about 40 minutes by train) so we could attend the Stockholm’s Kulturfestival (you can read more about it here: http://kulturfestivalen.stockholm.se/EN/index.php). It was amazing! We saw performances by Catalan, Swedish and Finnish artists. I am really happy we made it there on Saturday since it was the last day of the festival – definitely a well spent day!

On Sunday we went to a city named Gävle. Since it is a small city and not really a popular tourist destination we had a choice of doing an individual walking tour which turned out to be quite a success! We saw an amazing park, river, old bridge, prison museum, sunning town hall and much more. I’ve noticed that Gävle and Uppsala are very alike, but they have different vibes: Uppsala is more exuberant (but not as much as Stockholm!) and yet tamed in a way, while Gävle seems to be more of a nice small town (almost a suburb) that reminds me of a mystery box that hides all the beautiful spots that have to be discovered. Either way, I really loved visiting both of the cities. 🙂

People are also a big part of the exchange program. Not only am I meeting a lot of international students (there are not a lot of Americans, which makes Uppsala University a perfect place to make friends with people of other nationalities and backgrounds), I am also making a lot of Swedish friends. Don’t let the stereotype about Swedish coldness scare you – they are amazing people with interesting stories. And they are very funny too! There are a few Swedes who live on my corridor and I really like them; they are all so helpful and they do their best to make me feel at home. Swedes you meet at the social events are also very nice and talkative (I haven’t really experienced that famous coldness yet). After all, talking to people is the best way to learn about the country and its traditions, but also to find out more about the wonders this country hides.

Every day I am more and more happy that I have chosen Uppsala University as my study abroad destination since I am getting the best of both worlds – high quality education and amazing cultural exchange that will mark my college experience in a great way.

This entry was posted on Wednesday, August 22nd, 2012 at 1:35 pm and is filed under Fall 2012, Indira in Sweden. You can follow any responses to this entry through the RSS 2.0 feed. You can leave a response, or trackback from your own site.