Waterfalls and a little bit of history

I just got back from an amazing weekend getaway in Kanchanaburi, Thailand.  Kanchanaburi is about two hours (by bus) northwest of Bangkok.  The city itself is quite small – it is most frequented by visitors on their way to Erawan Falls, but the city does boast its own attractions– for example, the Bridge over River Kwai, which we visited the morning we arrived.

The bridge was commissioned by the Japanese during World War II in order to secure a better supply route between Thailand and Burma.  The bridge was built by both local Thais and prisoners of war, thousands of whom died during its construction.  The bridge is primarily famous because of the movie “The Bridge over River Kwai.”  There is not much really to see– it is quite literally a bridge over a river–not too thrilling.

The rest of the day we saw two more sites: temple caves and a World War II allied cemetery. The temple was an incredible labyrinth of underground, natural caves–very claustrophobic at some points! Each cave contains a shrine or Buddha.  Near the caves, our tuktuk driver took us to see the most incredible view of Kanchanaburi – the beautiful river surrounded by greenery and mountains on either side.  The natural beauty in Thailand is magnificent, and that was particularly evident this trip.  After spending so much time in a city, it is refreshing to see a more rural side of the country.

Our last stop of the day was to an allied war cemetery, which serves as the resting place for many of the soldiers killed building the bridge.  It was actually quite intense walking around and seeing all the name plaques – reading the quote written on the headstone, each name and nationality engraved, and particularly reading the soldier’s age; most were between 20 and 25, around the same age as I am.  I have to admit after my four months in Thailand I don’t know that much about its role in World War II so this was certainly a glimpse into some of Thailand’s history.

The next day we made the trek to Erawan National Park, located two hours from Kanchanaburi.  We had no idea how incredibly beautiful the national park would be! We literally spent four and a half hours walking along a path through the jungle, passing waterfalls as we went.  There are seven primary waterfalls that make up the national park, though there are small ones spread throughout.  There were tons of people – both international and Thai – and like everyone else, we walked from one waterfall to another and jumped in whenever we couldn’t stand the heat anymore.  It was incredibly beautiful, and so nice and peaceful to spend an afternoon just walking through nature, and enjoying it.

The most intense part of the trek was the 7th waterfall – much less crowded than the others because not as many people make it that far up.  As we approached the waterfall, the friend I was with, Rebecca, pointed out the monkeys overhead.  We had seen signs throughout our trek warning us to be careful of the monkeys because they can be dangerous, but hadn’t actually seen any monkeys until this point.  They were adorable climbing all over the branches, a mother and her babies.  While we were swimming in the waterfall, however, a large monkey got a little too close for comfort and started hissing at anyone who came too close.  It then went over to someone’s backpack, unzipped it, and started pulling out every piece of clothing in there and flinging it to the side.  Just as we were leaving, Rebecca pulled out a bag of peanuts, and within .2 seconds, the monkey was right in front of her, looking threatening as ever, moving exactly as the peanuts moved.  Completely scared, Rebecca just threw the bag of peanuts at the monkey – as we hurried off, we looked back to see the monkey rip the bag of peanuts open, and one by one, pop peanuts into its mouth, as he sat on the ground looking for his next target. 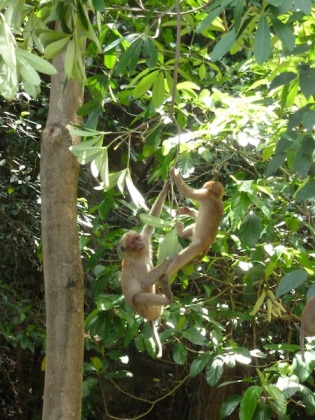 This entry was posted on Monday, April 9th, 2012 at 4:40 pm and is filed under Samantha in Thailand, Spring 2012. You can follow any responses to this entry through the RSS 2.0 feed. You can leave a response, or trackback from your own site.