Transported back in time…

I just came back from the most incredible trip to Myanmar (formerly Burma, but the United States chooses to use the name Burma as a political statement against the current Burmese government).  I have to admit, before arriving in Bangkok I was not at all aware of anything going on in Burma.  Nothing. Nada. Zilch. It was not until a dinner with friends in Bangkok, who are passionate about Burma, that I learned about the fascinating country and its political situation.  When you think of the world’s worst dictators, many of you may think of Kim Jong Il of North Korea, or Hugo Chavez of Venezuela, but did you know that Burma is one of the world’s worst dictatorships, responsible for some of the world’s worst human rights attrocities?  It is only in the past year that Myanmar has been creating better relationships with the West, and that the West has been easing some of the sanctions and boycotts against the country. But as many people told us, though progress undeniably has been made, in reality, things may not be so picture-perfect.

What really sparked my interest in this country, before my visit, was the story of Aung San Suu Kyi, depicted in the recently released film “The Lady.”  Suu Kyi is the leader of Burma’s opposition party.  Her father led Burma to freedom from Britain in 1947, only to be assassinated shortly after, leaving the country in the hands of a dictator.  Though she grew up in Burma, Aung San Suu Kyi later married an Englishman and had been living in England with her two children when she became the leader of the opposition party in Burma.  Though she claimed victory in a general election in 1990, the ruling party refused to accept the results and placed her under house arrest, where she spent 15 years, living away from her family in England and therefore sacrificing her life with her children and her husband.   Aung San Suu Kyi was released in 2010, and is a candidate in the Burmese parliamentary election to be held on April 1st.

Needless to say, this country is fascinating, and it is in the midst of one of its most critical times in history, so I definitely had to see this for myself.  On top of that, because Burma has literally been shut off from the world for so many years, we were told it was like going back in time to Asia 100 years ago.  Until recently, the Burmese did not have access to news from outside of Burma (purposefully controlled by the government).  A cell phone there costs around $1000, and the down payment for internet in your home is $2,000.  In most places outside of the capital, a “taxi” is a horse-drawn, or ox-drawn carriage.

Because we spent five very packed days around the country, I will give you the highlights of our trip:

1)     Yangon (formerly Rangoon, and formerly the capital of Myanmar).

There is not much to see in the city.  We spent only a few hours our first day, and a few hours our last day, exploring the Yangon.  Other than the Shwedagon Pagoda, an impressive and revered Buddhist religious symbol, there really wasn’t much to do.  The city is quite run down, and much less developed than Bangkok, understandably so.

Kalaw is an incredible mountain town, which we reached through a 12-hour overnight bus from Yangon.  We arrived at 2am, with no hostel booked, and no plan at all – it didn’t take us long to find the “Winner Hotel,” but the temperature had dropped overnight, so it was freezing.  In Kalaw, we did a trek into the mountains with two tour guides who were both 21 years old, named GuGu and Chaw Su.  We spent the whole day wandering through the mountains – the trek was not difficult, which was fantastic, because it not only gave us a chance to talk with the girls and learn about their lives in Burma, but it also gave our guides a chance to stop and point out different plants and crops along the way.  It is truly incredible what is grown in the mountains there! We saw oranges, pears, raspberries, gooseberries, ginger, cabbage, papaya, banana, pineapple, and much more! We stopped in two villages and two monasteries along the way, each time having a chance to (through our guides) talk with the families we met, sit down for tea, ask them questions, and laugh with them.  It was truly fantastic to be able to talk and interact with native people in a non-touristy setting.

In Kalaw, we also had delicious food – a broad-bean, peanut, tomato, and onion salad, noodle soup, and curry.  While curry in Thailand is coconut milk-based, Burmese curry is largely oil based, so it was interesting to try the different foods.

Just a two-hour drive from Kalaw, Inle Lake is one of the most popular destinations for tourists.  Similar to Kalaw, the town itself is very small, and very primitive, boasting half-paved, half-mud streets lined with small hostels, small houses, and shacks.  We spent an entire day (8 hours) on a boat ride around Inle Lake.  It was one of those long “typical” Southeast Asian boats, propelled by a motor.  The lake is enormous, so it was a 2-hour boat ride to our first destination.  Throughout the day we made many stops, including: a shop where silk is produced, a shop where cigars are made, a delicious restaurant, a paper making shop, a silversmith, and a few more destinations. Inle Lake is entirely made up of small villages, comprised of houses and buildings, which are on stilts.  Therefore, to get to each new shop, we had to go by boat, which is how locals get around as well.  The post office, for example, is a small house on stilts in the middle of the water.  Surrounding the villages are also endless fields of rice and other crops.  So throughout our day we observed men and women working to harvest and plant their crops.  We were able to stay out on the lake for the sunset, which was absolutely magnificent.

Before our 15-hour bus back to Yangon from Inle Lake, we rented bikes and biked in the area, again surrounded by endless rice fields; I’ll let the pictures do the talking, because it was absolutely breathtaking!  I came back from the weekend completely happy and refreshed; though I was exhausted, it was refreshing to have seen such an untouched nation, and to have been able to experience another country  knowing so much of its history and current political issues.  Even more importantly, we were able to fully interact and speak with locals to hear their perspectives, and those moments are what made the trip so incredible.

Below are some photos from the trip: 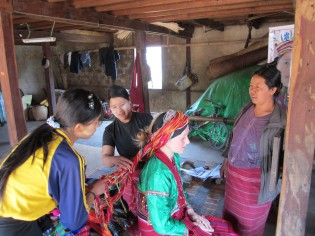 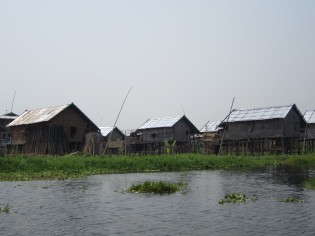 This entry was posted on Monday, April 2nd, 2012 at 3:10 pm and is filed under Samantha in Thailand, Spring 2012. You can follow any responses to this entry through the RSS 2.0 feed. You can leave a response, or trackback from your own site.

One Response to Transported back in time…