The most hyped weekend of the year, at least for college students, is now in the books: Carnival, or KadUWIval as it is formally called, came with much fanfare and it certainly proved to be one of the most culturally different experiences of which I had the pleasure of being a part.  You see, back in the United States, there are parades, and there are circuses, and there are parties, but never has one event been so bold as to combine elements of all three.  It was one of those special times where you don’t really know what something truly IS until you’re smack in the middle of it, going “Ohhh… so THIS  is carnival”.

I may have taken some liberty with my previous statement, as, in reality, if one searches for UWI and/or Barbados on YouTube, videos of Carnival are the first thing that appears.  Carnival, for the avid YouTube video consumer, should be the first thing one will have known about Barbados before actually being there.  My experience was a little different, however.  I was walking across the campus lawn, noticing a greater buzz of activity surrounding the area than normal, when a tall Bajan guy approached me, “Hey man, you jumpin’ for Carnival?”  “Jumping? Uhm, no, I don’t think so, man, what exactly is it?”

Simmz,  as I would later find out he was called, gave me the rundown on how it would work.  First, you join a ‘band’.  This is the group you will be organized into and ‘jumping’ with at the beginning of Carnival.  Each band has specific outfits the members wear, with different costumes for girls and guys.  The Carnival parade starts down near the cruise ship port in Bridgetown and ends on campus in Cave Hill.  What takes place during ‘jumping’ is this; the bands line up behind a huge truck stacked with speakers and posters, and once the music starts and the truck tires begin to roll, you have nonstop dancing, socializing, and picture-taking until the sun goes down and one finds themselves back at UWI.

I liked what Simmz told me, so I signed up for Carnival with his band, Island Army.  Now, usually, friends confer with friends before choosing his/her band, but since I didn’t really know what was going on and if there was a deadline or not, I dismissed the notion of conferring before choosing.  After all, Simmz had approached me out of nowhere and wanted me to be in his band — who am I to deny such adamant recruitment?  It turned out to be a good choice, anyways, as I talked to my Bajan friends Devito and Quaisy and they, as well, had joined Island Army.  The rest of the exchange group students had either joined the Halls Band or a band called Island Roots.

Fast forward three weeks, and it’s the morning of Carnival.  Girls are running around freaking out about how small their outfit pieces turned out to be, and the guys are still sleeping because all they have to do is wear their band t-shirts.  Carnival, I was beginning to realize, is maybe 5% about the guys and 95% about the girls.  No one is lining up to see me in my t-shirt — they’re there to check out the girls in their hot pink or leopard print outfits.  And as far as the outfits are concerned, less is definitely more.  Feminists may decry the event as objectifying women, but I think it is 100% cultural that they dress like that, and I don’t think you’ll find many Bajans that’d say otherwise.

Now, as far as the dancing that went on…well, that was cultural, too, I guess.  Caribbean women know how to dance — as children they are dancing soon after they can walk.  It’s no timid “I don’t really know how to dance, and I’m scared that people are looking at me” type of dancing one might frequently encounter in the United States, but a more full-bodied expression of rhythm and feeling.  I’m not going to lie, it was a little nerve-wracking for someone not completely sold on his own dancing ability to dance with exotically dressed, beautiful Caribbean women, but I was set on partaking in Carnival to its fullest, so dance I did.  For nearly three hours.  But Carnival was also a time of fraternizing with friends as well, and it was fun to see all the people I’ve met in the past two months out on the same street having fun together.  You begin to feel like maybe you’re not so much of a stranger after all when a friend comes up to you every five minutes and tries to get another girl to dance with you.

The Carnival procession finished up on UWI campus, and there everybody immediately remembered what they somehow forgot for the previous six hours: I’m incredibly hungry.  I had another “American” moment when I thought the contents of a yellow bottle was obviously mustard and so doused my hotdog in it.  It was Bajan hot sauce, and thus I proceeded to eat one of the spiciest hotdogs of my life.  But the day was far from done.  A big draw for a lot of the UWI students was the Carnival after-party, with one of the parking lots being craftily turned into a penned-in version of the last five hours’ various activities.

I liked Carnival for two reasons: One, nothing, or at least nothing I am aware of, exists like this in the United  States’ Northeastern region.  Nothing.  Two, it was a genuinely fun time dancing and socializing out in the beautiful Caribbean sun.

In fact, some past exchange students had flown down just to relive the epic weekend that is Carnival.  God-willing I save up enough money, I hope to be that guy next year. 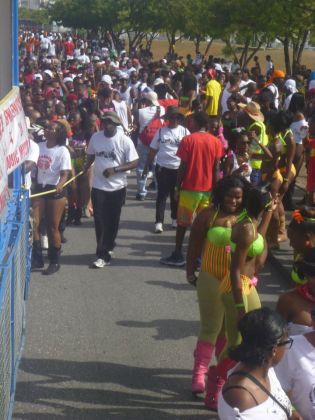 This entry was posted on Friday, March 30th, 2012 at 4:43 pm and is filed under Ryan in Barbados, Spring 2012. You can follow any responses to this entry through the RSS 2.0 feed. You can leave a response, or trackback from your own site.