When I see tall things in the distance, one thing pops into my head:  I must climb that.  I was perusing my sister’s photos of her own St. Lucia vacation when I stumbled upon the Pitons of St. Lucia.  Like a mismatched set of gigantic fangs, Gros and Petit Piton rise out of the Caribbean Sea on St Lucia’s west coast and are its most recognizable landmarks.  They are so important to St. Lucia, in fact, that they named their own indigenous beer, Piton, after them.

I flew into St. Lucia on a late afternoon REDjet flight on Friday, a flight all of twenty minutes, knowing only where my hotel was located and that it had balcony views of Petit Piton.  Unlike the United States, finding a cab is never an issue; they will find you, and quickly.  I knew the price was set at US$65 from Hewanorra Airport to Soufriere, so I got a kick out of my cab driver when he told me “It’s $75 but, for you, i’ll knock it down $65”.  So nice of him to charge me regular price!  But as the drive progressed and we began talking, and I learned that he goes by the name “Cow”, we bonded as much as a taxi driver and tourist can.  I learned that he owns 4 acres of banana trees as well as driving the taxi van 7 days a week, and that he has three daughters from four different wives.  That is one busy man, I thought to myself.

Cow offered to drive me to Gros Piton the next morning, but I would have to be ready by 6:00 a.m.  Of course one of the two nights I was in a spacious, comfy, air-conditioned hotel room I wouldn’t even be sleeping for more than five and a half hours!  Soufriere, however, is settled in between beautiful, lush mountainside opening up onto a quiet fishing bay, so when I woke up at 5:30 a.m. with light clouds rolling over the jagged mountaintops and the sun illuminating just enough detail, and it was definitely a sight worth seeing.  All I had to eat was a bag of peanuts that morning, with two water bottles packed for my climb, before my guide Shem and I began the ascent of Gros Piton just before 7:00 a.m.  It was a good thing we left so early, though, because even by the quarter mile mark, I had sweat pouring down my face while Shem had not even broken a sweat.  I guess that’s the difference between casually keeping in shape and hiking a 2,619 foot peak everyday.  The trail consisted, at first, of inclined packed dirt with a few areas of steep broken rock that would have to be navigated with use of all four limbs.  As the path hit the half-way mark and continued upwards it morphed into steeper switchbacks with crude earthen stairs and wooden railings nailed between especially steep sections.  If it had been just me, I would’ve taken my sweet time, but Shem was under the impression that a young man of my age was capable of going faster than I wanted, and thus I pretended to be hardly winded when we would stop for breaks.  With aching limbs, I reached the summit look-out point about an hour and ten minutes after we began, and there it hit me that it was completely merited to be so winded, because I was really, really high up.  The view was stunning:  You could see nearly the entire length of the island, with many of its uneven peaks shrouded in early morning clouds.  Soufriere was just a cluster of houses behind Petit Piton across the bay, and you could see numerous sailboats jetting around the west coast.

The way down was a bit easier, and in the fifty minutes it took us to descend from Gros Piton’s glorious heights, I learned a little bit about my guide, Shem.  Although I didn’t ask his age, he must’ve been somewhere between 17-19 years old, and had graduated from school in Soufriere.  Shem lived near the base of the Piton and had four brothers and two sisters, but he was a middle child.  He had been working as a guide on Gros Piton for two years, hiking the mountain at least once, if not twice, daily.  He told me the fastest he had ever climbed Gros Piton was in 55 minutes, but the slowest was with a group of older tourists who took 4 hours to make the climb!

Traveling to unfamiliar destinations is exhilarating, but, at times, it can be just as frustrating.  Upon coming back to town, I needed to take out money for my celebratory post-hike meal, but of course Saturday was the day where the Bank of St. Lucia in town was inconveniently switching its location to a waterfront building.  The ATM would not be operable until Monday.  Cow had to pick up a couple in the northern capital city of Castries at 12:00, so I had to take an hour drive north with him, take out money in Castries, and take a public bus an hour back to Soufriere.  Exhausted, dirty, and desperate, I stumbled into Archie’s bar and restaurant around 1:30 p.m.  and had the best chicken rotis and salad of my life.  Despite my limited time in St. Lucia, the only activities I could muster the energy for the rest of the day was to nap on the beach, nap in my hotel room, eat dinner at Archie’s, and wander the town streets and talk with some locals until around 10:00 p.m.

Sunday I played the typical tourist role, with Cow taking me and a couple from Arkansas around to the drive-in sulfur volcano just outside of Soufriere along with a trip to Toraille Falls.  It made for some good picture taking, to be sure, but it did not have nearly as an authentic, organic feel to it as did yesterday’s hike up Gros Piton.  Cow agreed to drive me over to the east coast for some sightseeing before my afternoon flight back to Barbados, and I even got a dip in at a beach down the road from the airport before my 5:00 pm flight.  I wouldn’t recommend cutting one’s time that close, however, as I enjoyed myself at the beach so much I almost missed the cut-off for check in.  All in all, a great weekend away that I would recommend for anybody — well, anybody who enjoys challenging physical exertion, that is — and a nice break before my head is buried in the books for midterms at UWI! 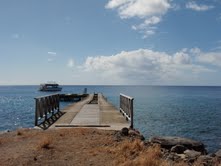 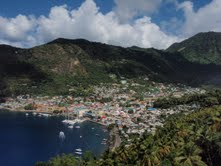 This entry was posted on Friday, March 16th, 2012 at 5:09 pm and is filed under Ryan in Barbados, Spring 2012. You can follow any responses to this entry through the RSS 2.0 feed. You can leave a response, or trackback from your own site.