On the 26th of February, I went on the  International School’s tour of Jerusalem.  It was the longest touring day of my entire life.  Leaving campus at 6:30 A.M, we had a beautiful two hour drive through farmland, small cities, and the Judean Hills to Jerusalem.  Approaching Jerusalem, it was hard to believe I was actually going to see the city that has existed for centuries in the imaginations of Jews, Christians, and Muslims as a city of great holiness and significance to their faith.  Jerusalem is the object of songs, poetry, paintings, and religious longing for so many throughout the world, and I now had an opportunity to experience it for myself.

Somehow, though, the reality is quite different from the idealized images and feelings many have come to associate with Jerusalem.  The tension is almost tangible, and as we visited King David’s tomb, the site of Jesus’ Last Supper (a former church that has now been turned into a mosque), the Western Wall, and the Church of the Holy Sepulchre, I realized the extent to which the people and faiths of Jerusalem live intertwined with each other, yet are distanced by the conflict and perpetual state of unsettled feelings between the varied groups within the city.  Jerusalem is a mixture of so many different people, with such widely varied backgrounds.  Israeli soldiers carrying guns walk through the streets across from Catholic nuns in their habits, and groups of American tourists with their huge cameras and enthusiastic tour guides make their way through the vibrant, lively Arab market.  I was struck by how you can often tell what group someone is affiliated with by their clothes or head coverings – Orthodox Jewish married women wear a different head covering than the hijab of Muslim women, and Hassidic Jews in their tall black hats stand out from the other Jewish men wearing kippahs, or smaller head coverings.  The clothes they wear identify the differences they have with each other, making the religious and cultural divisions within the city physically apparent. 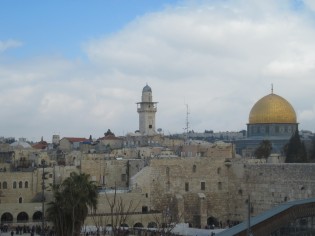 In both my Biblical Theology and Literature of the Shoah (Hebrew word referring to the Holocaust) classes, we have discussed the idea of memory, and how it influences and shapes people and nations.  Reflecting back on my time in Jerusalem, I realize that national memory is one of the factors that make Jerusalem so important.  Jews pray at the Western Wall because it is a tangible piece of their national memory. The Wall is all that remains after the destruction of the Second Temple, but it stands as a symbol of what they have survived as a people.  Jerusalem is full of symbols, from the Dome of the Rock standing on the site of Mohammed’s Night Journey as recounted in Muslim tradition, to the Mount of Olives, turned white by the graves of Jews awaiting the Messiah’s arrival.  Made up of physical locations that past events or promises for the future have made crucially important to so many, it is no wonder Jerusalem is one of the most fought over places on earth, historically and today. 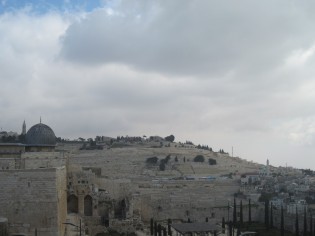 Sometime before this semester ends, I want to visit Jerusalem again, but this time to take it slower, letting the experience sink in more deeply.  I need a fuller picture in order to begin to understand the city.  There was a lot I didn’t see, and a lot I need to see again before I can begin to process the full significance of what Jerusalem stands for.

This entry was posted on Monday, March 12th, 2012 at 4:37 pm and is filed under Rebekah in Israel, Spring 2012. You can follow any responses to this entry through the RSS 2.0 feed. You can leave a response, or trackback from your own site.