There is something really intriguing about a country that truly takes a day of rest.  Every Saturday in Israel, shops and businesses close down, buses don’t run their normal routes, and most of the people you see are taking their children to the playground or having a peaceful walk.  After three intensely packed, exciting weeks of classes, tours, making friends, and finding a rhythm to life in a new place, taking this time for reflection and processing has felt more needed than ever before.

Even though it takes more advanced planning to make sure you have all the groceries and things you need before the stores shut down late Friday afternoon, I love the feel of Shabbat.  In my opinion, it limits you to the most meaningful ways of spending your time, whether it is time spent growing closer to God or building meaningful relationships with the people around you.  Last night, I had a quiet dinner with three friends, and it was a wonderful time spent talking through the challenges and joys of our time in Israel thus far.

Last Shabbat, three friends and I hiked from the university to the beach.  We left the university around noon, and made it to the beach just after sunset, after five intense hours of scrambling down the rocky trail running through the national forest that parallels to the city almost all the way to the beach.  At least it was all downhill!  At one point, we came to a fork in the road and were unsure of the way.  Luckily, there was an Israeli family who had stopped for a break right there on the path, and we were able to get some directions from them.  But it wasn’t just a quick exchange like an encounter would have typically been in the US; they engaged in further conversation with us, asking how long we would be in Haifa, and when they found out we were students, asked what we were studying.  I feel like this interaction exemplifies the relaxed, relationship-oriented atmosphere of Shabbat.  Overall, though, Israelis have been incredibly helpful and generous in all the encounters I have had with them so far.

One thing about adjusting to Israeli culture that has been interesting is that there is not one, but many cultures for me to adjust to.  Within the international school, there are students from all over the world, each with their own perspective on life and Israel, and within Israeli culture itself, there are many differences.  The respectful, gentle personalities of my Arab roommates contrast with the more blunt and outgoing personalities of the Jewish Israeli roommates some of my American friends live with.  It is quite a culture study!  At times, it feels like I am studying abroad in multiple countries at once.

I have been learning Hebrew at an alarming rate, although I’m still trying to get confident enough to practice in front of people outside of class.  I have been trying to order at the little sandwich counter on campus in Hebrew whenever I have a break, and the guy who runs it always smiles to himself as I struggle through the words.  I am getting better, though!  Although I have realized more than ever that learning Hebrew is a lifelong process.  But I’m taking this as a challenge, to see how much I can learn in the few short months I am here. We just have one week left of Ulpan (my intensive Hebrew class) — I can’t believe how it has flown by!  This has been the most intense language learning experience of my life, but also a very fulfilling one.  Next week, we start our regular semester classes, and the Ulpan group of 97 people will be joined by about 25 more international students, but we will also lose some students that were here just for the Ulpan.  That will give me even more to get adjusted to, but I am excited about meeting even more new people! 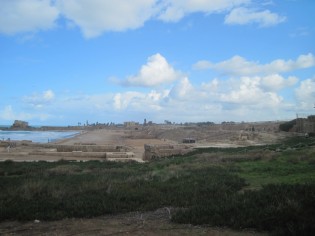 Ruins of the ancient city of Caesarea — some of which weren’t uncovered until 1992.

Me on our epic hike!

This entry was posted on Friday, February 10th, 2012 at 4:09 pm and is filed under Rebekah in Israel, Spring 2012. You can follow any responses to this entry through the RSS 2.0 feed. You can leave a response, or trackback from your own site.

One Response to Shabbat Shalom