Since we met each other in September, Megan, Lauren, and I had been talking about taking a trip together. We all wanted to venture deeper into Europe and have a wee vacation away from Derry. We unanimously decided on Paris. We had been told several times that we would fall in love with the city if we visited. A professor had also mentioned that an airline called EasyJet always had cheap tickets for travel within Europe, so our planning began.

We researched several different hostels within the city and settled on one that had pretty good reviews online. The only downside to this particular establishment was that management only spoke French. Having a history with the French language, our little group relied on me to deal with any transactions in my very simple French.  It turned out to be no problem at all.

On our first night in the City of Love we explored a bit trying to find somewhere suitable to eat. I’m not sure about my friends, but I know that I was a bit nervous to walk into a restaurant and order off a menu only written in French. We happily stumbled upon a restaurant/café with the menu posted outside (written in both French and English). The waiter happened to be standing outside when he heard us speaking. It must have been a novelty for him to run into Americans because he seemed excited to learn where in the States we all were from. He guided us inside and immediately recommended the duck- a French classic. Lauren and I decided to try as many French foods as possible while we were in Paris, so we went with his suggestion. It was absolutely lovely. At the end of our meal we chose crème brulee as our dessert to celebrate our trip to Paris. To our surprise, the waiter (who we later referred to as “nice French man”) also brought out a dish of chocolate mousse to welcome us to the great city. As we were leaving he also quickly wrote down metro directions to the Eiffel tower which we were planning to see the next morning. My experience in Paris proved the stereotype that the French dislike Americans completely false.

The next morning we took the lift all the way to the tip top of the Eiffel Tower. The views were remarkable to say the least. I have been in some pretty tall buildings (like the Sears Tower in Chicago) but it is much different to be that high in the open air. Megan and Lauren were a bit skeptical in taking the second lift all the way to the topmost level. I was too excited to look around the be nervous. My knees however did start to quake a bit when we took the stairs down from the second level to the first level. Its very strange to be that high up on an open air structure when you can feel the wind blowing. It will definitely be something I will never forget.

After we made it all the way back down, we walked a good distance away to get a view of the monument from afar. We walked by a street artist with work displayed and I fell in love with some of his drawings. I ended up buying 4 of them and the artist gave me another one for free- see, the stereotype being broken. You can see his work at this website: http://www.mario-paris.com/.

While taking some pictures, we ran into another group of American students. They were all from St. Cloud in Minnesota and were currently studying in Germany. It was very strange to hang out with some other Americans for a while. I love the people here in Europe, but it was just refreshing to talk to people going through a similar experience. From the tower we all walked to the Arc de Triomphe and the Champs-Élysées. We walked around for a while then made plans to meet up with the other Americans later for drinks. Being the American girls that we are, Lauren, Megan, and I decided to see all the stores lining the Champs-Élysées- a big shopping location in Paris. We grabbed dinner which included a lovely appetizer of snails. I have had escargot before, so I knew what I was getting myself into. It was great to see Megan and Laruen’s faces as they tasted it for the first time. I was then able to check that off the foods-to-eat-in-Paris list.

While talking to the American students we had met, we came up with the best meeting place ever- under the Eiffel tower. That night we actually ended up going to and Irish themed pub which made the three of us feel at home.

The next morning we had three things on our to do list- Versailles, the Louvre, and Notre Dame. Because Versailles is further out of the city, we decided to go there first. After several buses and trains, we finally got there. And all the traveling was well worth it. The place is massive. And beautiful. In fact, it is so massive and beautiful that there are bikes for rent to take around the gardens and that is exactly what we did. We rode all around the grounds and the pond and just enjoyed the lovely day. Before we left we took a tour of the larger palace and were amazed at the size and grandeur of the place. There are countless rooms with crystal chandeliers and hundreds of pieces of artwork. There were salons with paintings big enough to take up the entire wall. In several rooms, the ceilings were completely painted with Bible scenes. Here are a few  pictures of Versailles: 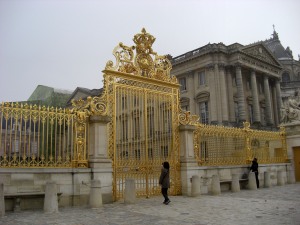 After we felt so completely like princesses, we decided to head to the Louvre. Not having planned much of our trip in advance, we sadly arrived at the Louvre to find that the museum portion was closed for the day due to a national holiday. This was slightly disappointing, but who can be sad in Paris?! We headed on to the Notre Dame and realized that day was November 11, 2011. That’s 11/11/11. So at 11:11 pm on 11/11/11 we could make the most epic wish ever underneath the Eiffel tower. We had a bit of time to kill so we enjoyed the Notre Dame Cathedral from every angle and wandered the streets of Paris for a while. Then our last night in Paris ended while sitting underneath the Eiffel Tower making wishes. It was magical. 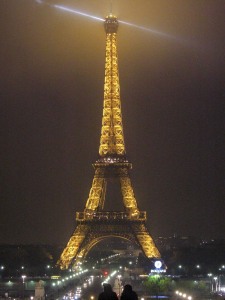 Fun Fact #11: Young people in Northern Ireland are paid a “living expense” to go to school when they are around the age of people in high school. My friend Tomas said, “Aye, I think we were given about 30 quid a week”.

This entry was posted on Tuesday, November 29th, 2011 at 4:06 pm and is filed under Fall 2011, Julia in Northern Ireland. You can follow any responses to this entry through the RSS 2.0 feed. You can leave a response, or trackback from your own site.