The River Runs Free (or should) and Chiang Mai

Here in Khon Kaen, Thailand, working as a member of a group and visiting villages every few weeks, the term solidarity has come up a few times. It seems that the more time that passes, the more frequently the term is used. What does solidarity mean in relation to these issues? What does it mean in the villages?

On a journey to discover what solidarity really means, one telling village was Ban Huay Top Nai Noi. Not only does this protest village share passion and drive, but they have a plan. Made up of villagers from two different surrounding villages, this village was formed to protest a dam project upstream. These villagers’ homes were not going to be flooded, but their farms and their livelihoods were. In 1995, the protest village formed in the flood zone of the proposed dam project. Paw Sampone said, “We moved to the flood zone because if they want to build the dam, build the dam. But, if you retain any water, you will be killing people.” The power of their mission is not just for themselves, however —  it is for the land and the people around them.

For communities we visited during unit 4, which are potential or previous dam sites, the river is more than a source of water. The flooding created or exacerbated by dams is not just detrimental to the crops in the farmland or the homes in the area, but completely destroys livelihoods.

For example, in communities in Rasi Salai, the end of the rainy season has led to absolutely no source of income for the people. The wetlands, their original source of food and crops, is flooded. They cannot gather crops that have been sustaining their families for hundreds of years. Because of the dam reservoir, their farmlands are also flooded to the point where they can only get around some parts by boat. Many cannot even walk to their farms to see how much damage has been done. The final portion of these villagers’ income comes from handicrafts made and sold at the local learning center. The center is up to the roof with water because the land the people were given for the project is located on the banks of the reservoir. The supplies to make most of the crafts come from their fields, as well. So without farmland just a few weeks before harvest, plus no crafts and no place to sell them, the dam has led to no financial stability or security for the people of Rasi Salai. Their homes may not be flooded, but they continue to band together because without the other community members, some families could easily go hungry.

This community serves as a mentor for that of Ban Huay Top Nai Noi. They have provided guidance, comfort, and support during the hard times. They inspire the people of Ban Huay Top Nai Noi, and encourage their fight. Even through the violence that occurred, the people of the protest village stayed in their new location. Their presence is a fight, and it is a message. “We do this for the land. Land cannot regenerate, but people are born everyday.” Their strength comes from each other. “Wherever we go, we go together. We share everything, not just knowledge.” These words of the community members is what enables the movement they are part of. They have a cause and support and the strength of their community is what true solidarity looks like. They stand, fall, live and fight together.

After the water unit was our four-day break, which came and went quickly, and what an amazing adventure it was! Just a quick summary — I went to Chiang Mai and saw the floating lantern festival. It was the most amazing thing, and it is a time to pay tribute to the river, so it was fitting following our water unit. I rode an elephant, played with baby tigers, and went bungee jumping (never thought I would…)  Although I indulged in foreign food like burritos and falafel, it’s good to be back in Isaan where there aren’t tourists and I get to speak Thai.

Onto the mining unit, which should be really interesting and I’ll have more time with internet to blog in a more timely fashion! 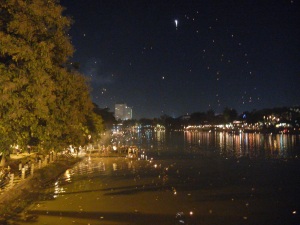 This entry was posted on Wednesday, November 16th, 2011 at 11:58 am and is filed under Fall 2011, Julie in Thailand. You can follow any responses to this entry through the RSS 2.0 feed. You can leave a response, or trackback from your own site.