We are in the thick of exams season at Sydney Uni! Exams work very differently here compared to how they are at Richmond. They’re spread out over 3 weeks, with the first week being a ‘reading week’ where there are no exams. I was unlucky enough to have 3 exams on the last 3 days of the exam period, and to put the cherry on top, the last on is on a Saturday! Needless to say, I have quite a few long nights ahead of me. In this post, I’m going to talk about housing here in Sydney and the neighborhood I live in.

Sydney University exchange students get a discount to live at a building called Urbanest Cleveland Street in Redfern, an inner-city suburb of Sydney. It’s about a ten-minute walk up the Cleveland Street to the edge of campus. However, Sydney real estate prices are very, very expensive, and Urbanest is no exception. I would compare Urbanest to Gateway Village back at Richmond, but it is much more expensive, even considering the favorable exchange rate. Luckily, the Office of International Exchange is generous enough to give students studying abroad in expensive locations a $1000 stipend, which helps mitigate the ridiculous cost of housing in Sydney. There are other student accommodations in the suburbs surrounding Sydney Uni, but my Urbanest location had the advantages over these options of ensuite bathrooms, a kitchen for each apartment, availability on a semester-only basis, and the discount.

I share an apartment with five other (American) exchange students, one who also happens to be a Richmond student. The six of us share a kitchen, with each of us having our own bedroom and bathroom. The building itself is very modern and comes equipped with a (very expensive!) laundry room, computer lab, gaming room, and gym, among other amenities. So while Urbanest is expensive, I think that the quality of the housing and its proximity to campus is worth the cost.

My (cleaned just for this picture!) bedroom at Urbanest. It’s definitely a comfortable size for one person.

While my building is technically located in Redfern, it is actually at the corner of 3 different Sydney suburbs – Redfern, Chippendale, and Darlington. It’s also less than a five-minute walk to Redfern station, one of the biggest train stations in Sydney. You can take a train from Redfern to pretty much anywhere in the city (except for the airport, which can be frustrating as a travelling exchange student). Living so close to the train station has been a highlight of my time in Sydney — I’ve never lived in a city before, and public transport has always been nonexistent. Not having to rely on a car and being able to catch a train anywhere I want to go in the city has been an amazing experience.

On the way to Redfern station, I walk up what was formerly the most infamous street in Sydney – Eveleigh Street, or ‘The Block.’ The first time I walked up Eveleigh Street, I immediately noticed a grouping of tents in a field, just in sight of the station. I later learned that the tents were what is called an Aboriginal Tent Embassy. To explain the origins of this tent embassy, I need to explain Redfern itself.

Redfern is a suburb with notorious connotations in Sydney. When I first told my parents that I’d be living in Redfern, they balked. As people with a view of Sydney from the early 2000s, all they knew of Redfern was its seedy reputation. The neighbourhood is known for its high concentration of Aboriginal Australians. As I’ve learned in my Australian history class this semester, the relationship between Aboriginal Australians and non-indigenous Australians has been extremely complex and is fraught with tension to this day.  For example, even before Australia became an independent nation, the advent of white settlers decreased the native population by 90%, and up until the 1970s, the federal government forcibly removed indigenous children from their families under the guise of “child protection.” Aboriginal Australians still experience severely disproportionate rates of poverty and incarceration, and lowered life expectancy and health. It’s been fascinating to observe the differences between the way indigenous peoples are treated here versus in the United States. Here, the prime minister in 2008 made a formal apology on behalf of the government to the indigenous population, there is a National Sorry Day annually for people to reflect on the historical treatment of Aboriginal Australians, and before many speeches and ceremonies, it’s customary to mention that the indigenous tribe is the “true owner of the land.” Thinking of these differences though, I can’t help but reflect on one of the signs I saw at the tent embassy: “don’t recognise, decolonise.” While it seems like Australia is much more progressive concerning its relations with its indigenous people compared to the United States, is it just a facade? It doesn’t seem like merely mentioning and apologising and reflecting is enough — what actions are being taken? 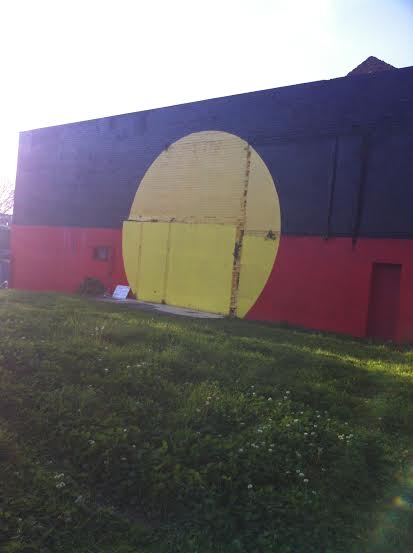 The Australian Aboriginal Flag painted on a wall next to the tent embassy. Another difference from the United States: it is designated as one of the official flags of Australia and is flown alongside the Australian flag.

One day right before mid-semester break, I walked my normal path up Eveleigh Street to Redfern station and was shocked to see that the field where the tent embassy had been was completely empty. I later learned they had been evicted. As the presence of my student accommodation complex suggests, Redfern has been rapidly gentrifying and has mostly shed its infamous reputation. It’s not fully gentrified yet — there are always a few people begging outside of the station — but it’s been dramatically changed in the last decade or so. Developers from a charity called the Aboriginal Housing Company evicted Aboriginal people from their homes on Eveleigh Street and then demolished them, promising to provide low-cost housing for the original residents. Instead, the company has decided to build more student accommodation on the land, and the tent embassy was erected in protest. The eviction came coupled with a promise of a grant to build the promised low-cost housing alongside the student accommodation, but I definitely will be following this case when I’m back in America to see if it actually comes to fruition.

This image isn’t mine; it’s from Wikipedia. But I really like it because it shows the proximity of Redfern to the rest of the city, and shows the appeal of the neighborhood for gentrification. Also — see that ugly brick building with the weird windows in the background? That’s Urbanest Cleveland Street.

Living in Redfern has been an eye-opening experience for me. It’s been a way for me to see the history I’ve been learning about in class first-hand. It’s been a lesson in prejudice — I was initially nervous to be living in Redfern, but I’ve since learned that it’s not at all dangerous and not to judge places on their reputation. And lastly, it’s been an amazing way to experience living in a city for the first time.

This is my favorite street in Redfern, called Vine Street. Walking past the brightly-colored houses on my walk to the station always puts a smile on my face.

This entry was posted on Tuesday, November 17th, 2015 at 12:54 pm and is filed under Fall 2015, Layla in Australia. You can follow any responses to this entry through the RSS 2.0 feed. Both comments and pings are currently closed.