Layla in Australia: A Day in the Life

Today I received a reminder on my phone telling me to renew my travel notification for my bank. My bank only lets you notify them that you’ll be traveling abroad for 90 days at a time, which means this notification means I’ve been in Australia for just about 3 months. Needless to say, I didn’t realize how long it’s been! I’m just over halfway through my time abroad, and in 3 more months I’ll be starting the spring semester back at Richmond. To say I’ve settled here in Australia is an understatement – I feel just as home here as I do in the United States, if not more. To use some of my Australian slang that I’ve picked up, I’m really not keen to come home… in fact, I still haven’t booked my return flight to the States. Here, I’m going to describe a typical day for me here in Sydney, and hopefully show why I love it so much.

9 AM, any given Thursday: Wake up… after hitting the snooze button on my phone about three or four times. While I was never a breakfast person in America, the lack of a meal plan and a dining hall on campus means that buying lunch is expensive. Instead, I typically eat a bowl of Weet-Bix, a classic Australian cereal, for breakfast and bring a granola bar and some fruit for lunch. After getting ready, playing around on my phone, and eating breakfast, I make the ten- to fifteen-minute walk up the road to uni.

11 AM: Macroeconomics lecture. While it’s tough to keep focused for the entire two hour lecture, the material is interesting enough to stay awake and the ten-minute break in the middle helps. The professor tends to show how what we’ve learned about in class applies to the Australian economy, so I get to learn about not only general macroeconomics but Australian policies as well.

1 PM: With lecture over, I cave to my biggest weakness: coffee. I don’t really drink coffee at home – I’ve never liked the taste. I did drink caramel macchiatos while studying for the MCAT, but mostly the appeal was the caramel sauce. The coffee was just the bitter obstacle that I drank quickly so I could indulge in caramelly goodness. However, Australia is known for its delicious coffee, and I decided that I couldn’t come here and without trying a flat white, the classic Australian coffee drink that’s like a less foamy cappuccino. Needless to say – I had one, and I was hooked. Coffee here is so good that I don’t even need sugar to make it palatable like I do in America. My guilty pleasure at uni is a flat white and a croissant from the café in the New Law Annexe. 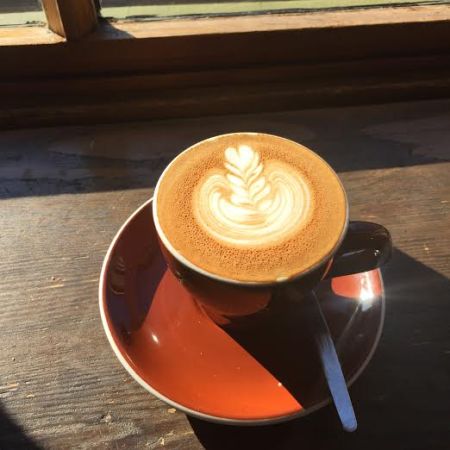 A flat white from the coffee shop where I first tried Australian coffee, Campos in Newtown.

For the first half of the semester, I had four hours of gruelling chemistry lab directly after my economics lecture. This lab, which I had multiple times a week, was the bane of my existence, endlessly frustrating me with my inexplicable failures in it. But luckily, as of a few weeks ago, the lab has ended and I can finally go to quidditch trainings! Trainings on Thursdays are 3-5 PM in Victoria Park, the park bordering the USYD campus. I’ll generally do a little study after my coffee break and then head to training, where we run drills, play scrimmages, and play netball. Netball is a sport that’s pretty popular in Commonwealth countries but almost unheard of in America. It’s similar to basketball, but one major difference is that you can’t run with the ball. Needless to say, I often forget this rule, so netball isn’t my favorite. Practice usually has about fifteen people present.

5 PM: After practice, the quidditch team heads to the pub! Generally we start at the Forest Lodge Hotel (affectionately nicknamed the “flodge”) just north of campus in the suburb of Glebe for dinner and then head to the neighboring Roxbury Hotel for trivia at 7:30. Weirdly, pubs are called hotels here… as are hotels. That was definitely confusing at first! 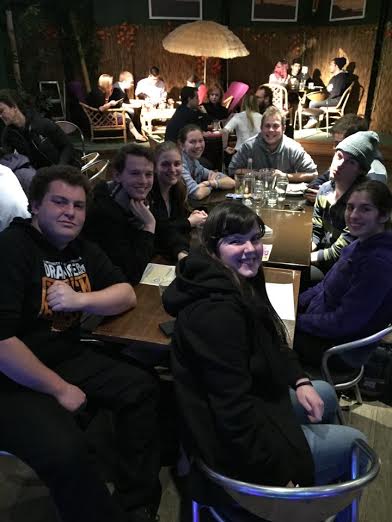 Me and a handful of quidditch mates at the Roxbury hotel. This was actually taken after my very first training at USYD. I’m in the purple jacket, and pictured clockwise are my friends: Kat, Cameron, Lachlan, Laurel, Nat, Tom, Lachlan, and Paul. Usually our table is two or three times the size!

Since Australian universities are mostly commuter schools, the focus of social life is off-campus, typically at pubs. On-campus or house parties are almost unheard of, except for students who live in colleges (which are akin to American fraternities, and generally only for students who don’t live in the metropolitan area.) Since there are no communal dining halls, dorms, or apartments for students to socialize in after classes, pubs fulfil that role. Speaking sociologically, drinking is much more of a focus in daily life at university here than it seems to be in America, even accounting for the lowered drinking age.  ‘Mateship’ is one of the cornerstones of Australian culture, and buying drinks for your mates and having them reciprocate is one of the ways that it is expressed.

Typically, my friends and I will stay at the pub until it closes, around midnight, with some people filtering out earlier to catch public transport home. Usually then we will split up to go home, or if we’re still feeling sociable, some will come over to the apartment complex where my friend Sam and I live, Urbanest. It has a TV room on the ground floor filled with couches that is typically empty by the time we get there, and is great for late-night hangouts. Once everyone goes home, all I have to do is take the elevator up four floors and I’m home.

Hopefully this post has given you a little insight on what it’s like to be a university student in Australia. My life isn’t glamorous by any means, but it’s definitely fun. While I’m not jetting off to a new country every weekend like many study abroad students, I think that by immersing myself into Australian culture, I’ve gained a much deeper appreciation for where I am studying abroad. I think for a lot of study abroad students, between all of the traveling and lack of deep connections with local students, their host country becomes interchangeable with any other place. Not to say that traveling often or being friends with other exchange students is bad, but I think that by making local friends and really getting to know Sydney on a deeper level, my study abroad experience has been infinitely richer. I can’t even fathom how much it would have lacked without my Australian friends – they have made this experience what it has been so far for me, and I will miss them terribly when I go back to America.

This entry was posted on Thursday, October 15th, 2015 at 3:21 pm and is filed under Fall 2015, Layla in Australia. You can follow any responses to this entry through the RSS 2.0 feed. Both comments and pings are currently closed.