Becca in Hungary: See You Later

Its hard to believe that my program is officially over! These past few weeks have just been a whirlwind of emotion. As my brain desired to study for my final exams, my heart desired to finish exploring the city I would soon have to say goodbye too. It wasn’t until these last fews weeks where I began to realize how much I really formed a new home here (Note to parents: No worries! Where you are will always be my real home!). During the last week of the program I had my study abroad advisor, Abby Ward, and computer science professor, Dr. Lawson, from the University of Richmond come and visit AIT. As I walked them through the streets of Budapest I finally began to have that feeling of “oh man I KNOW this city”! I have conquered public transportation, mastered finding great food, and gained knowledge of the history of the streets that I have been walking.

My heart has been so conflicted, because while part of me wants to continue to learn more about Hungary and finish exploring every crack and corner of this city, my other half is ready to be home. I miss the softness and warmth of my towel after taking it out of the dryer (no dryers in Hungary). I miss being able to understand the language being shared around me. I miss the wonderful combination of peanut butter and chocolate that is a rare find across Europe. And though all of these things seem like small things; not having them for five months has helped me see the simple joy and pleasure you can find in them. Not only do I miss the cultural differences that Hungary and America have, I also miss all the people. Like any spring semester I typically do not see my parents and grandparents until summer when I return home for a couple weeks before I embark on a new summer adventure. But this semester I miss them more than ever before. I already have butterflies thinking of the day coming so soon where I will see them in the airport ready to take me home. I am ready to go home, but I will never be ready to say goodbye to Budapest. Instead, I simply say “see you later” because I know someday our paths will cross again.

And though I am ready to return to the people I love some much in America I will also miss the people I have met through my program here. It still hasn’t hit me that I may never see some of these people ever again. Even when I was “saying goodbye” to everyone at the final ceremony I continued to say “see you later”. Our paths were intertwined for a reason, and I can only hope that soon those paths will re-intertwined. Till then I simply say “See you later”. 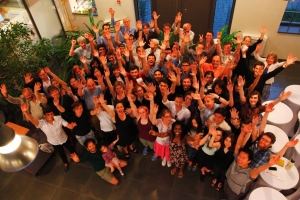 This entry was posted on Tuesday, May 26th, 2015 at 10:35 am and is filed under Becca in Hungary, Spring 2015. You can follow any responses to this entry through the RSS 2.0 feed. Both comments and pings are currently closed.