I considered writing a simple reflection on my time in Prague in my penultimate post (I will write a finale right before I return to UR), but I figured the souvenirs I returned with could do a better job illustrating my last four months. Don’t worry, I got y’all a bunch of gifts too. Without further ado:

Football Ticket — I had to save my ticket from what was the greatest sporting event I have ever witnessed. One of the best, if not the best, nights I had in Prague came 48 hours after I arrived. Four other students new to Prague and I ventured to Generali Arena in hopes of experiencing the atmosphere surrounding a European Qualifying match between the Czechs and world-class-juggernauts Holland. Unexpectedly, we stumbled into five tickets, and witnessed a truly amazing game that the Czechs miraculously pulled out. I recapped the night in more detail soon after it happened.

Pilsner Mug — Spending a semester in Europe, and Prague in particular, comes with the stigma that it is a big, endless party, which is far from true. If your study abroad experience was just one big party, you wasted a non-replicable opportunity. At the same time, experiencing different bar atmospheres and meeting a wide range of people, both locals and other foreigners, at bars around the city proved to be an informative and fun way to learn about the local culture. Pilsner Urquell is THE beer of the Czech Republic, so I brought a mug home with me as a reminder of all the amazing people I met and all the fascinating stories I heard while drinking Pilsner Urquell.

Lucerna Ticket — The other souvenir from my nightlight adventures in Prague differs greatly in its meaning from the Pilsner mug. I brought home a ticket to Lucerna’s weekly 80s and 90s party, which was the spot for Americans on Friday nights. The playlist was top notch, consisting of throwback after throwback. Lucerna served as the perfect venue for our one last going away party.

Prague Beanie — Prague’s Christmas markets, like many other cities in Europe, were fantastic. There were many small markets scattered around the city with little stands full of Christmas trinkets, food and drink, and cute winter clothes. My one tangible takeaway from the markets is a bright orange beanie that I will excessively rock next semester.

Mike Tyson Energy Drink — I bought this energy drink when my entire program traveled to Krakow for a weekend. There isn’t a whole lot of significance behind this drink – I just saw an energy drink with a huge Mike Tyson face on it, so I figured I had no choice but to buy and save one.

Thanks for the energy drink, Mike.

Berlin Collage — The lone souvenir I bought in Berlin is a collage from a small art market that an expat American made. The caption, translated from German, reads, “You can’t buy culture.” Yet that was exactly what I was doing – buying a piece of art from Berlin that is linked to a cool story and interesting artist I met. I’m looking forward to hanging this collage in my room next semester, so everyone knows how cultured I am.

Warning: These next two items might be overly sentimental.

Czechoslovakia T-shirt — My pal Kevin and I stumbled into a sweet clothing market on one of our last days in Prague. There were a bunch of shirts that stood out to me, but this one light-blue shirt of a van with the caption “Made in Czechoslovakia” jumped out. I thought the shirt was cool, so I bought it – pretty simple equation, I know – but I began to appreciate it more in the coming days. “Made in Czechoslovakia” began to have more of a meaning for me. Sure, Czechoslovakia no longer exists and I wasn’t exactly “made” in Prague, but still, it fascinated me. Prague, in a way, shaped me. Any place where you spend a great deal of time will shape you in one way or another, and I can actually notice vast differences in my personality, views, and goals compared to who I was and what I believed in last August. I may not have been made in Czechoslovakia, but I was shaped in the Czech Republic.

Tattoo — My favorite souvenir, and the one that will stick with me for the rest of my life, whether I like it or not, is the tattoo I got in the final few weeks of my stay. I had a globe sketched into my right bicep along with the caption “Svét je náš”, which means, “The World is Yours” in Czech. The cheesiness here is obvious, but this quote, which comes from a movie I’ve never seen and a song that I like but don’t love, inspires me. My father has always preached to me that the world is much smaller now than it was a generation ago, but that never really struck me until I actually got to experience a new part of the world. And I don’t want to stop now. I love my friends, and I love my family, but I like Prague, and Europe in general, more than I like the Northeast and Mid-Atlantic of the United States. My time in Prague was certainly a once-in-a-lifetime opportunity – how many times do you get to spend a few months in a foreign city with unlimited freedom and limited responsibility – but now I want to explore somewhere else. Grad school in Europe? Why not. The world is yours.

Is it obvious I don’t work out? 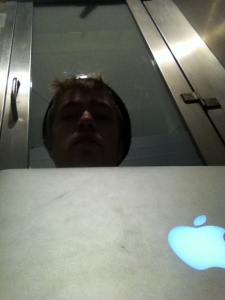 I struggled to find time to write a blog post in my final days in Europe, but I managed to find time when I really did not want to. On Dec. 24, the day I moved out of my apartment, I thought I’d be creative and send my suitcases down two floors in the elevator. I’ve used this shortcut before to make my life marginally easier, and I expected similar results. Instead, my bags fell on the elevator door, preventing it from opening. Two hours of waiting, $125, and increased loss of sanity later and the elevator door magically opened thanks to a repairman gracious enough to accept my cash on Christmas Eve. This is when I knew I was ready to come home.

This entry was posted on Monday, January 5th, 2015 at 10:09 am and is filed under Fall 2014, Jack in Czech Republic. You can follow any responses to this entry through the RSS 2.0 feed. Both comments and pings are currently closed.