I cannot believe that I have already been in Valencia for a full week. This semester is going to fly by. I’ve already attended all four of the classes that I am signed up for, so I know what I am in for academically. My classes are as follows: Literatura y cine, Cultura y civilización, Islamic Iberia, and La historia del siglo 20 en España. All of those are pretty simple translations so I’m sure you guys can figure it out! My program, UVA in Valencia, has its own building off a main street, Gran Vía de Blasco Ibañez, which is right next to the campus of the University of Valencia. It’s about an hour walk from where I’m living so I normally take the bus or the metro.

Traveling in Valencia as a pedestrian is so convenient. Between the metro, the bus, and the bicycle system, you can get anywhere you want to go relatively quickly. I picked up a Móbilis card a few days ago which opens up all of these services for about 9€ per 10 trips. Yesterday, I registered for the bicycle system known as “Valenbisi.” There are these bicycle stations all across the city, and once you register for about 27€, you can pick one up and have 30 minutes before putting it back at a different station and picking up a new one. It is a great system that could only work in relatively small cities like Valencia. Needless to say, I will be able to get my way around this city with ease. Also, since it’s such a small city, I am already pretty familiar with the main spots. 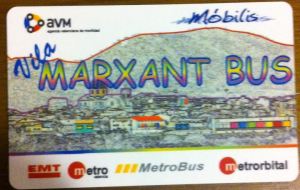 A picture of my Móbilis card

Now for my host family! I am one of the only students at the UVA in Valencia program that has a father as well as a mother. Interestingly, most students only have a host mother. I’m sure I will learn more about this in my culture class. I also have three siblings: María (oldest sister), Guille (21 year old brother), and Mark (10 year old little brother). The whole family has been very inviting, but to be honest, the language barrier can be very tough at times. I have no doubt in my mind that I will be conversationally fluent after these four months because there is no English spoken at home or at school.

Last weekend I went out with my friends on Thursday, Friday, and Saturday. Thursday we went to a bar near our respective houses and quickly befriended the bartender who found out we were Americans all too quickly. From there we went to a place known as el Barrio de Carmen. It’s a small neighborhood with three clubs that get big around 2 am. Friday we took it easy and posted up in a different bar for a few hours before calling an early night, jetlag was still nagging us. Saturday was easily the biggest night of the weekend. My 8 friends and I went to this huge outdoor club known as L’umbracle. It is a massice discoteca in Valencia near the aquarium. That night we didn’t leave until about 5 am. These Spaniards have an absurd stamina…

The core group of my friends enjoying a night out

During the day on Saturday, my whole program took a trip to Peñíscola which is a small city north of Valencia. It is called Peñíscola because there is a 800 year old castle on a peninsula next to the main city. We spent the day here on the beach and in the warm, clear water. Then we went into the castle and toured the massive building. 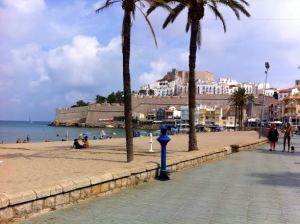 A beautiful view of the castle on Peñiscola

It turns out that selfies are as big here as they are in the States!

This is the village within the castle walls

We had the day off on Sunday, so we got a big group of about 15 of us together, and did a short walking tour of Valencia that focused on the cathedral. The images of the buildings are magnificent so I will leave a couple here:

A typical narrow street in Valencia

We were pretty sure this was Gringotts Bank 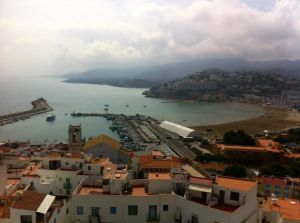 A great shot of the entrance to the peninsula

Detailed entrance to the main worship area of the cathedral 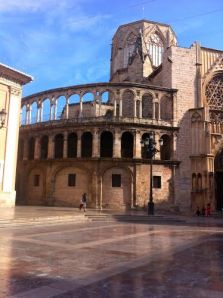 I wasn’t exactly sure how to format this entry because so much has happened so if it seems all over the place, that’s my bad. Point of the entry though…I’m having a blast!!!

This entry was posted on Monday, September 15th, 2014 at 1:51 pm and is filed under Fall 2014, Oliver in Spain. You can follow any responses to this entry through the RSS 2.0 feed. Both comments and pings are currently closed.