It was a beautiful day and I had an hour break before my next class so I decided to go on a walk. I’ve noticed we only get about two nice days per week here in Akita. The other days it’s either pouring rain, constantly pouring, or simply cloudy. I walked off campus, passing Banafi (the only convenience store for miles), and headed to a bridge that overlooked some rice fields. It took only about 5-10 minutes to walk to the bridge. I was listening to Chance and enjoying the cold wind hitting my face. While I was looking over the bridge I heard someone call my name. My friends Toshi and Ria were driving past me. Ria stuck her head out the window and kept yelling my name. Toshi messaged me immediately on LINE afterwards asking me how the weather was. It was a good way to start the week. I’m glad I ended up going on a walk because, as expected, it rained the next few days.

Here’s a selfie I took on my walk. My friends always get mad at me for making this face: the Nomi face. I don’t like smiling in pictures so I always end up making this face. I would also like to mention my mom sent me that FILA sweater I’m wearing in the picture and I can’t emphasize how thankful I am. It’s only November and it’s already so cold here that you need all the sweaters you can get. 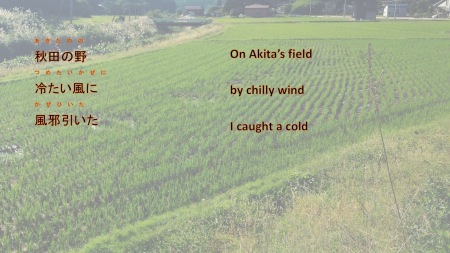 After my walk, I still had time to spare so I went to the IT lab and kept Patrik some company. He goes there a lot since his laptop is broken. I know in the picture he’s obviously scrolling through YouTube but he was actually working on his five haikus for Japanese literature class. Listening to music inspired him to come up with some haikus. He wanted to write them in Japanese and translate them into English. I helped him with one of the haikus – the squid ink one, you can see it in the picture. I ate a squid ink riceball for the first time in Okinawa a while ago and wow, it was delicious. My tongue was super black afterwards. I told Patrik when we go this winter break that I would make sure he tries one. The other picture is of one of the haikus he came up with. I couldn’t stop laughing because I’m not kidding when I say Patrik has had a constant cold since he first got here. He gets sick all the time and carries nasal spray around him because his nose is never unstuffed. Poor guy. It makes for a great haiku though! 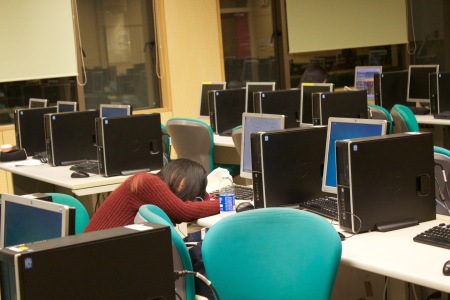 Patrik and I went to the IT lab again to print out our third draft for the ポスター発表 (poster speech). At the end of the semester, all students in JPL300 have to give a 5-7 minute speech about anything they wish. I’m tremendously nervous for it because it’s just a lot to remember in just Japanese. I’m talking about Okinawa though so it should be fun! Anyways, I snapped this picture of a girl passed out at the computer – a good representation of the life of an AIU student. Just kidding, people here are so lively, full of energy and on top of their studies at the same time. It’s a wonderful community, really.

I Facetimed Madison, my friend from UR, this week! I’m not good at keeping in contact but she is, thankfully. She messages me and makes sure we Facetime biweekly to update each other on our lives. She’s studying abroad in Madrid right now so the time difference isn’t too bad, only 8 hours. We give each other advice on our dilemmas, of course. Unfortunately, she’s studying abroad in Spain for the entire year so I don’t get to see her when I return back to Richmond this January BUT I might visit her in the summer and travel around Europe with her for a bit. I’m not sure though, it’s up in the air. I miss her!

Annabelle and Isabella are both in JPL101 and they had to give a short speech in Japanese for class. They talked about their vacation to Korea this past summer. I listened to them and corrected them when they made a mistake. The participles threw them off a bit but they went over it about 5-10 times and had it all down by the end. Annabelle made a PowerPoint full of pictures from their vacation and it was fun to look through. They went to a Dog Café while they were in Korea and there was a picture of Annabelle with a huge smile spread across her face next to a pug. The pug looked terrified and its eyes looked like they were about to pop out of its head. It was wonderful. 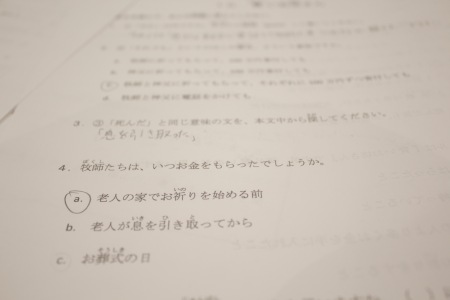 Oh man, don’t get me started on Japanese Reading class. I don’t remember if I have mentioned but with our JPL300 class we are able to take supplemental classes, such as reading and kanji – I’m in both. Well, for Reading class, we are assigned a reading per week and have to answer questions based on the reading. Recently, the readings have been getting increasingly hard with all of the vocabulary and grammar. This week we read a story about an old man calling for a priest, monk, and minister to pray for him before he passes so he can go to heaven. He gave each of them ￥10,000 ($100) to come and pray for him. However, before he dies, he asks each of them to place ￥2,000 ($20) in his coffin so he has money in heaven. At his funeral, the priest and minister each place the ￥2,000. The story ends with the monk taking the ￥4,000 from the coffin and placing a check inside for ￥6,000 ($60)….do you get it?

Patrik and I took a while to finally understand the story. Our friend Sandy who is also in our class helped us translate it. When we finally understood what the monk had done we cried full of joy. Not really, but it felt like we were about to…we were so relieved to finally understand the story and answer the questions. Sandy, from Taiwan, comes to my LDIC sessions to improve her English so I’ve gotten close to her. She comes every week now and it’s great. I can tell she’s improving in her English and becoming more confident in speaking it! 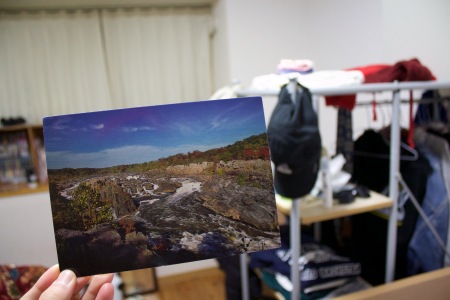 Michelle, another friend from Richmond, sent me a postcard this week. We wanted to be pen pals but after our first letters she stopped because she became too busy to write a letter. Instead she sent me this postcard, which is totally fine because I love postcards as well. She actually just started working at the gym on campus so I’m glad I still get to see her often despite her graduating this past year!

We had another nice day this week so I asked Annabelle and Isabella to join me on a walk. My friend Isshin showed me this open space in the beginning of the semester so I decided to go there. The goofballs made me walk in the front just in case there were spider webs. I brought my camera with me and told them I would take photos of them. I guess they were so excited for a photo shoot that they even wore matching sweaters. I played some music from my iPhone and they just started doing random poses.

They did several cute poses, as you can see in the first picture. Isabella asked Annabelle if she could touch her toes for a picture and Annabelle couldn’t do it. She claimed to be inflexible and I kept telling her to straighten her legs for the picture. We all couldn’t stop laughing. Then, Isabella reached over and said, “Annabelle, I can touch your toes.” That’s when we all lost it. My stomach actually hurt from laughing so hard. 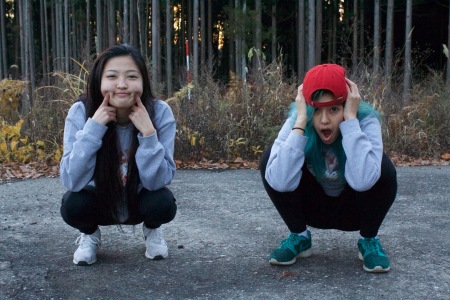 My iPhone shut off because it was too cold outside so Isabella started playing music until her iPhone also shut off due to the cold. Annabelle pulled a weed from the ground and started playing with it so Isabella did the same. They both started practicing their dance for the dancing event next weekend. My mom and Tyler, my younger brother, are visiting next weekend so we’re all going to go and see them perform! We ended up walking back to campus as the sun was setting. We used the flashlight from Annabelle’s iPhone to make sure we wouldn’t walk into any spider webs and thorns. By the time we got to the cafeteria for dinner, our fingers were numb. We couldn’t even use our chopsticks correctly.

I tried getting a nice picture of the sunset yesterday but my camera skills are lacking. I just wanted to say that a lot of us are starting to get upset knowing that the semester is coming to an end. After this weekend, we only have four weeks of classes left. It’s unbelievable how quickly the semester has gone. It feels like yesterday we were all meeting up at the beach, singing our hearts out at the karaoke place. Instead of getting upset over it, I’m going to enjoy the rest of the time I have here and make the best out of it.

This entry was posted on Monday, November 28th, 2016 at 2:42 pm and is filed under Fall 2016, Naomi at Akita. You can follow any responses to this entry through the RSS 2.0 feed. You can leave a response, or trackback from your own site.