I appreciate Patrik so much. I’m so used to drinking five cups of coffee at Richmond because it’s so easily accessible so I appreciate Patrik letting me make coffee in his room. I was having a hard time staying up in my International Trade class so Patrik brought me a cup of coffee during my class break, before my History of Pre-Modern Japan class. やさしいね〜 (he’s very kind, huh?)!

Isabella and Annabelle finished writing their speech about their Korean trip for JPL100 and I finished my grammar homework for JPL300 and this was the outcome. We were all very tired so we continued to hang out in Annabelle’s room in Sakura Village. I was also messing with my camera a bit. Trying new lightings and what not.

Do you all remember the Draw Something app that came out maybe…four years ago? Well, Griff, Patrik, and I were hanging out in the Komachi Lobby and rediscovered the game. Some of our other friends joined in and we soon found out that Griff is actually Picasso. How do you even draw that nice of a toilet and blender? I want his drawing skills.

Griff even drew me…I don’t have a neck but it’s still a pretty good drawing considering he drew me with only his index finger on his small screen.

We had our first snow this past week. I still can’t believe the snow stuck. It’s only the beginning of November. I woke up and heard the hail hitting the ground and immediately fell back into bed…very unwilling to walk outside in the cold. Thankfully I bought a winter jacket from UNIQLO though and it actually keeps me very warm. Now I have to buy some snow boots though or else I’m going to injure myself. 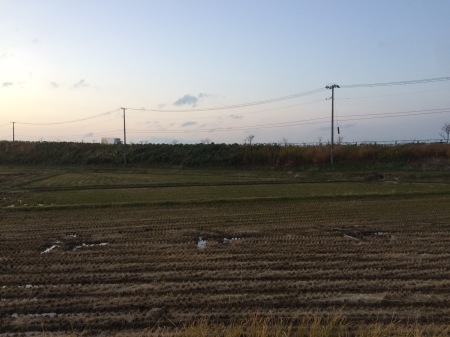 Saturday, a group of us took the bus to AEON to eat lunch then walked over to Yotsugoya station to head into Akita City. I had the directions up on Google maps but closed the app when I realized where the train station was…you could see it in the distance. Unfortunately, the rode split into two and we didn’t know which road to take. Everyone yelled at me for closing the app then proceeded to split up. Patrik, Griff, and I walked on a path that led into the fields while Isabella, Annabell, and Tristan took the actual road. We ended up meeting up five minutes later as the roads met up! We made it to the station five minutes to spare before the train arrived.

You wouldn’t believe this but we actually ended up getting on the wrong train. It took us in the opposite direction. That’s the life of AIU international students: reading the schedule wrong and getting on the wrong train/bus. The train took us to Wada Station so we had to wait there for an hour before the train came to take us to Akita. It was fine though. We listened to some music on Patrik’s speakers and took a couple videos of us doing the mannequin challenge. If you don’t know what it is just look it up online and it should pop up as it’s trending right now. We had to retake one shot at least 10 times because I couldn’t stop laughing. Anyways, we went into the city and went to Karaoke for about 3-4 hours. Unfortunately, I did not take any pictures but just know we sang our hearts out to 80s music and Michael Jackson songs. We took the last train from Akita to Wada Station and walked for an hour back to campus.

I’m super proud of all of my friends for expanding their collection of beer stickers. Most of the time Japanese beer cans have a sticker on them so I decided to start collecting them on my phone. When I got to Akita, I influenced people to start collecting the stickers as well. Everyone has more than me now though and it’s upsetting. I took off all of my stickers recently so I have 0… 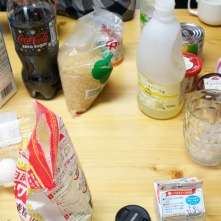 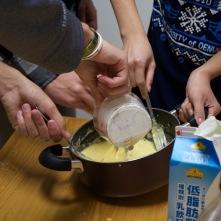 Sunday afternoon, everyone came to Isabella’s apartment to make crepes. Griff and Patrik had been planning this out for about two weeks now. It was originally supposed to be pancake day but Griff told us that the pancakes wouldn’t be as good without baking powder, so crepes it was. Patrik went all out and bought whipped cream, chocolate sauce, strawberry jam, canned peaches, and canned pineapples for the crepe toppings. We didn’t have a whisk so Griff, Annabelle, and Patrik stirred as fast and hard as they could with the forks and chopsticks. It was pretty intense. 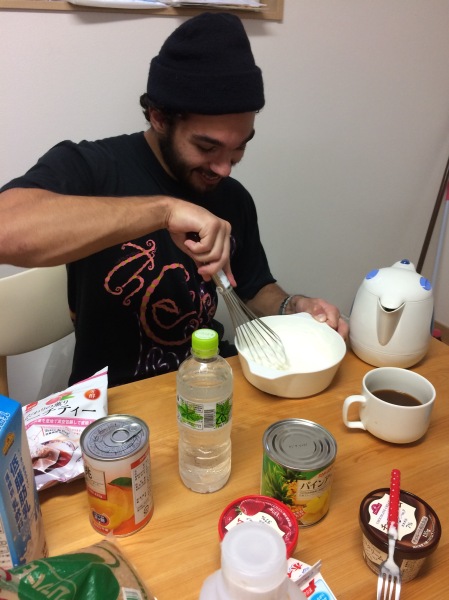 I FaceTimed my mom asking for help on how to make the whipped cream since none of us could read the directions. She told me that we needed a whisk or else it would be very difficult to make. So, Patrik actually ended up running to the Komachi kitchen and finding a whisk. The whipped cream was almost impossible to make with just a fork. Kevin had been stirring it for about 20 minutes and the consistency was still very liquid. Tristan took the whisk and stirred for only about 5 minutes before it turned to actual whipped cream.

We actually had a can opener but I guess it didn’t work out too well…I turned my back to help Isabella with the crepes and by the time I was done the can was opened like this. Super dangerous…we should probably invest in a nice can opener. 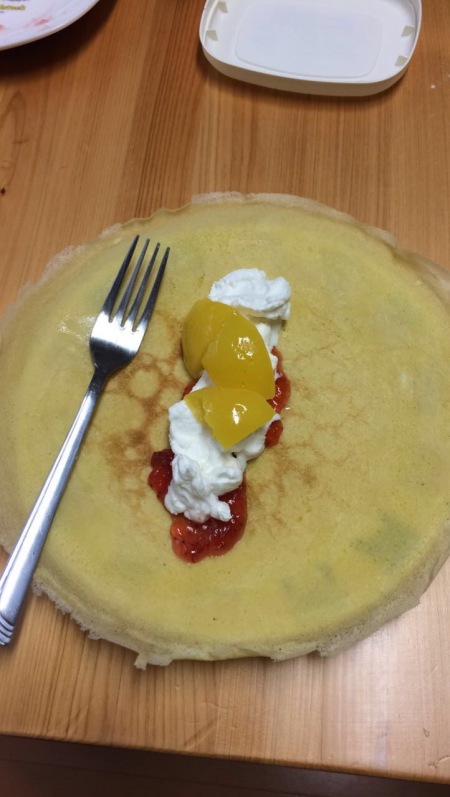 The first one was pretty rough but Isabella looked up a tutorial on YouTube and after that the crepes came out perfect. Patrik sprinkled some brown sugar on his crepe. He had the first one and Kevin commented on the placement of the whipped cream. All of us put our whipped cream inside the crepe and Patrik found it super weird. I guess that’s just a minor culture difference in the way we make crepes. Everyone had 1-2 crepes and we were still very hungry so Isabella ended up making some Kraft Mac and Cheese that my mom sent me recently. Eating American food was a nice change. My mom is visiting at the end of this month so I’m going to have to ask her to bring some more mac and cheese with her!

This entry was posted on Monday, November 14th, 2016 at 2:35 pm and is filed under Naomi at Akita. You can follow any responses to this entry through the RSS 2.0 feed. You can leave a response, or trackback from your own site.