Emily in Samoa: A Trip to Savaiʻi

Our courses alternate between intense weeks of papers, exams, and debates, to weeks of experiential learning, where we all get on a plane or a ferry and go somewhere. Last week was one of the latter, and our director sent us off on the ferry to spend two nights at beach fales on the island of Savaiʻi, the larger island of Samoa.

After two days of relaxation, she met up with us, as did her friend Warren, an 86-year-old Australian who has been inhabiting the island for over thirty years, looking at lava flows, making odd deals with local businesses, and exuding an affable nature to those around him. In other words, Warren is what many of our local sources have been: a character.

Looking out over the lava fields

After breakfast on Monday, we crammed into his van, and went to look at lava fields on the northern part of the island. Only a quarter of Samoa’s population lives on Savaiʻi due to difficult farming conditions. Samoa is located on a hotspot which has been moving over the years, so the soil on Upolu is older, and has had more time to gather the appropriate nutrients for farming. Nothing is built on the most recent lava fields, from the early 20th century, though many locals will chip off pieces to use for houses and graves. The fields are huge, and spread to nearby villages as well.

On Tuesday, Warren brought a bus. “Alright people! Get in,” he quipped. “We’re going to see some blowholes.” We spent the day driving all the way around the island, stopping to crawl through lava tubes and points of interest along the coast. One point was the westernmost point of Samoa, formerly the westernmost point in the world (until Samoa changed the dateline). There, waves crash against the rocks, shooting spray high into the air. The rocks break apart in the middle, and this marks the path that the souls of deceased Samoans would travel, before Christianity made it necessary for them to reroute. After walking the path, the souls jumped into whirlpools, returning to the ocean. The quiet, cloudy point was ideal for spending hours watching the sea.. 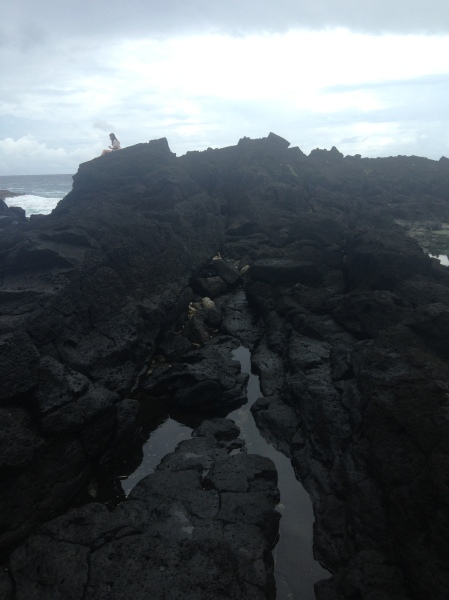 The path of souls

At last, the blowholes. They were a bit further down the coast, and channeled the water from waves through small holes, until it sprayed 60 feet in the air. One of our guides brought along coconuts, and would look at us, grin, then gently toss the coconut into the blowhole. At the next wave, the coconut shot out, higher even than the water, and get tossed out to sea. Even though the wind was at our backs, we covered our heads instinctively.

Peering into the blowhole

We spent our last few days at fales on stilts, built around a lagoon near the island’s main port. These served as our base for our next set of excursions, which included a volcano hike, waterfall swimming, and making tapa, bark cloth from the paper mulberry tree.

It was a busy week, but we have experienced a lot that we’ll take back with us. Most prominent is the incredible damage done by climate change, and the lifestyle changes it entails. Our fales on the beach were new, built after those that were formerly on a stretch of coast went underwater. Though they were protected by a ring of sandbags and sharp cliff in the sand, the waves still hit us when we were lying in our hammocks.

I know many people who don’t feel the need to worry about climate change, or even believe it exists—and I think this is largely due to it not affecting them yet. In the US, especially in non-coastal areas, climate change and environmental destruction are easy to ignore and wave off as something Out There, but not Here. Well, it’s here, in Samoa and the other Pacific islands. A warming in global temperatures, even by a few degrees, means that low-elevation countries near the equator can no longer grow certain crops. And though Samoa is endowed with high mountains, atoll countries like Tuvalu and Kiribati (KEER-uh-bahs) don’t have long before they will need to evacuate.

For those of us living far away from this, the situation is shocking…something that you would want to push out of your mind and not think of again. And people in countries like the US can do this successfully. But if this was your life, this slow submersion, what would you do?

Kiribati has bought a number of islands in Fiji, and people plan to relocate there, dragging and dropping an entire nation. Tuvalu has not yet devised a solution. Some people look for work abroad, others have resolved to remain on their land and die there. Those that do not come up with any plan will become what the UN is calling “environmental refugees,” and will be beholden to the whim of powerful, oft-indifferent countries (as we have seen happen with war refugees). 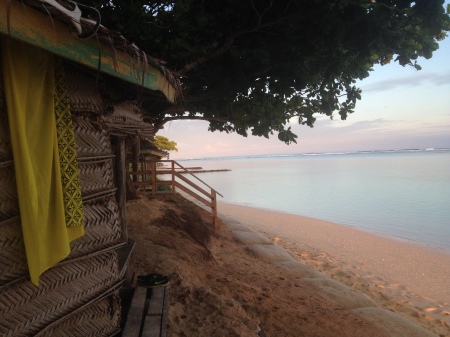 I don’t want to portray islanders as weak, because they aren’t. They are inventive, strong, and capable of dealing with what the world throws at them. But no one can fight a rising ocean, and if we do not begin to recognize the problem as it manifests here in the Pacific, we will be in big trouble when it threatens out homes, as well, in higher temperatures and drastic changes in weather.

And so we sat, dangling our legs out of our fales, watching the waves crash.

This entry was posted on Monday, March 14th, 2016 at 3:07 pm and is filed under Emily in Samoa, Spring 2016. You can follow any responses to this entry through the RSS 2.0 feed. You can leave a response, or trackback from your own site.