Austen in Ireland: Animals, Softball, and the Parents

After St. Patrick’s Day, I had a week to relax and attempt to start working on my copious amounts of assignments due in April.  Once school started again, it seemed apparent that the second half would be more intense with the large number of assignments, finals worth up to 70% of my grade in some classes, and on top of that, trips to see more of Europe.

The weekend following the break, a friend and I went to the Dublin Zoo.  I hadn’t been to a zoo in about eight or so years and Dublin had a great zoo supposedly so I figured I had to go.  I was amazed by the size of it, as you could easily spend a whole day there.  They had so many different types of animals, but I was disappointed that they didn’t have sloths as well.

After this, we went to a Gaelic football match in Croke Park where County Dublin took on County Mayo.  It was one of my favorite experiences of the semester so far because the sport was really fast-paced and entertaining.  It ended up being a draw with Dublin staging a come-back and also having a chance to win it at the end.  I wish I could see a hurling match (the other sport big here) but I don’t think I’ll get a chance to.

The first weekend in April the UCD Softball Club had their “Intervarsities.”  Intervarsities is a tournament where other softball clubs around Dublin and Ireland come for the weekend and we play.  It was overall some great fun.  I played seven games over the course of the two day tournament, so I was exhausted to say the least.  It was great being able to meet people from other clubs as well as getting to know people from the UCD Softball Club better.  My UCD team ended up losing the third place game, but the UCD 1 team ended up winning the tournament.

The next weekend my parents came to visit me in Dublin.  I really enjoyed taking them around and being able to show off my knowledge of the city was definitely rewarding.  I realized how much I had missed them.  I showed them some attractions in the city of Dublin, such as Temple Bar with all of the pubs.  My dad really enjoyed having traditional Irish food and Guinness while in Dublin.  We also went to the Jameson Distillery that Friday which was a fun experience. 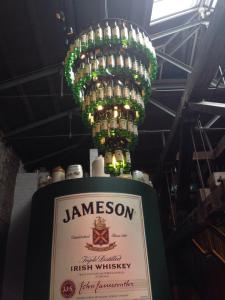 I showed them the UCD campus and they were amazed at the facilities and the size of the campus.  I wanted to see a UCD soccer game before I left so my parents and I went to see them play Dundalk right on the UCD campus.  Unfortunately, UCD lost but the fans were definitely entertaining.  I showed them around the city and we saw the Dublin Castle. My mom and I also had a chance to go inside St. Patrick’s Cathedral, a very impressive cathedral. 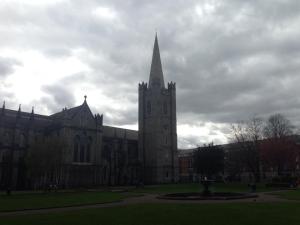 The next day, we continued our tour of Dublin and I showed them around Trinity College in the city center of Dublin, the National Gallery of Ireland, and the Natural History Museum.  Needless to say, I had a very long weekend.  The last day before they left, they helped me prepare for the long trip back in less than a month and then we took a walk along the River Liffey and then up O’Connell Street.  I wish I had time to show them some of the Irish countryside but it was an overall fun weekend getting to see them.  It didn’t hurt that the weather was beautiful!

This entry was posted on Tuesday, May 6th, 2014 at 1:37 pm and is filed under Austen in Ireland, Spring 2014. You can follow any responses to this entry through the RSS 2.0 feed. You can leave a response, or trackback from your own site.