여행: A Weekend Trip to Muuido and Silmido, Silkworms, and Korean Hospitality (posted by Indira in South Korea)

If you ever get sick and tired of Seoul (which is by any means absolutely IMPOSSIBLE) or you just need a couple of days away from the big city, the rush, and the notion of being busy all the time, you can always take a trip. A group of eight exchange students at my host University – including myself – decided to take advantage of a free weekend and go on a trip to a nearby island – Muuido. Muuido is a small island located about a 15-minute ferry ride from Incheon (which is a city located an hour subway ride from Yonsei University) and it is the perfect getaway place for a weekend: you can go hiking, climb the rocks on the beach, walk around, ride horses, go zip-lining and much more!

Our trip started with an early Saturday morning gathering in the SK Global House (one of the student dorms) lobby, meeting some people at the subway station, and a long subway ride to Incheon airport. From there we took a bus to the place where we hopped on a ferry that took us to Muuido. Upon our arrival we noticed many stands and Koreans willing to sell corncobs and silkworms (!). Being tourists, we got a cup-full of silkworms. A very bad idea, I may add. Only three of the people from our group were brave enough to try the silkworms: it must have been one of the worst things they have tried, according to their faces and their reactions (which made me happy to be one of the group who didn’t dare to try weird smelling silkworms). Unfortunately, the silkworm adventure did not end here. Right after we tried the silkworms, the bus that was supposed to take us to the other side of the island, where the beach is, arrived. So we got on it (with the cup of silkworms, which ended up being the worst decision possible). The bus was full! Crowded! It was so hard to stand while being pushed from all sides and, of course, my motion sickness kicked in, especially since the silkworm smell was so overwhelming. I honestly don’t know how I survived the 30 minute bus ride which definitely was the worst bus ride ever, but the torture stopped once we reached our bus stop close to the beach entrance. I have never felt move relieved or happier to get off a bus and get some fresh air!

Since we arrived to the island during the low tide we used this chance to climb the rocks along the beach and enjoy some amazing views (despite the fact it was very cloudy) right after getting a quick lunch. It was so much fun climbing big rocks and racing to see who would make it to the top first. Afterwards we went on a three hour hike to the top of the island. That was a challenge for me. I am not really a person who does sports, but I very much enjoyed this hike. The reward – the view from the top – made me forget the pain and the thought of how sore I was going to be the next day. It also happened to snow for a couple of minutes while we were on the top, which made this experience so much more unique and special. When we got back to our huts on the beach we got dinner and then made a bonfire. It definitely was a day of new experiences and bonding with people I had met fairly recently (some of them I met that day). 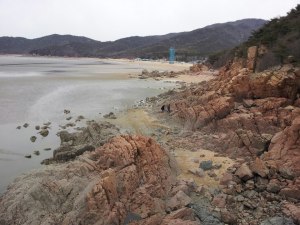 The second day of our weekend trip we went back to the bus stop thinking we would have to endure another horrible bus ride in order to get to Silmido, a small island that you can walk over to when the tide is low. Luckily, we met the most amazing, generous, and hospitable group of Koreans ever. Jina, a German-Korean girl who speaks perfect Korean (it’s very useful to have her around as it is much easier to get by with someone who speaks the local language), approached the group of Koreans to ask them about the bus and they happened to be producers of a Korean TV broadcaster KBS, and after a short conversation they gave us traditional Korean snacks and offered us a ride to Silmido as they were heading there too. KBS had rented a whole bus for the crew and they had nine free spots on the bus, which worked out extremely well for us (there were eight of us). Their generosity did not stop there: once we arrived to Silmido they invited us to join their barbecue on the island. They were so welcoming and warm. I couldn’t believe that a group of people would be so nice to eight strangers they had just randomly met on an island. Afterwards we walked over to Silmido, picked up some trash (since it was what the KBS producers did), and then joined in for an afternoon of games (frisbee and a sport that is a mixture of volleyball and soccer). As if that was not enough, the KBS crew gave us a ride back to Seoul for free. We were all very much surprised and happy about meeting the greatest group of people possible. They definitely made our weekend trip that much more enjoyable.

Enjoying the barbecue provided by the KBS producers, the most generous and amazing group of people I have ever met

Coming back to Seoul meant that we had to get back to school and our regular everyday duties and work, but this weekend will definitely be one of the best weekends in Korea. Not only have I experienced so many new things and seen a new side to this country I now call home, but I have also met an amazing group of people who will always be on my mind when I meet strangers that might need help or are on a search for good time. 🙂

This entry was posted on Friday, April 19th, 2013 at 12:55 pm and is filed under Indira in South Korea, Spring 2013. You can follow any responses to this entry through the RSS 2.0 feed. You can leave a response, or trackback from your own site.

One Response to 여행: A Weekend Trip to Muuido and Silmido, Silkworms, and Korean Hospitality (posted by Indira in South Korea)